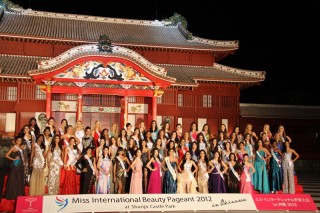 The pageants three-week program started with a reception at the Shuri Castle.

One of the world’s most prestigious beauty pageants, the Miss International Beauty Pageant, is now putting this year’s 80 contestants through their paces on Okinawa.

The young ladies drawn from countries around the world are all on the island now, and have begun participating in nearly three weeks worth of planned activities that include visits to Okinawa’s top sightseeing spots, such as Peace Memorial Park in Itoman and Okinawa World at Nanjo City.  Between now and the finale on October 21st, the gals will also take part in the Naha Matsuri, the tug-of-war festival and parade, and visit the prefecture’s outlying islands of Ishigaki and Miyako.

The pageant’s opening gathering was Tuesday at Shuri Castle, attracting massive media attention as Miss International Pageant officials announced that Okinawa’s strong support has led to a decision to hold the event on Okinawa the next 10 years.  Okinawa Prefecture says the pageant will be the premiere cornerstone event in Okinawa’s world promotion.

For the young ladies, Okinawa is a paradise.  Many describe the island as “a really special place, weather is great, people are friendly, humidity is fine, and nature is great!”
Some contestants from the northern reaches of the world say “the weather looks like heaven!”  Shuri Castle was the initial stop on their sightseeing agenda and they called the historic, cultural site “an amazing place” and said it has motivated them to want to see as many parts of Okinawa as can fit in their schedule.

One element of the pageant competition is knowledge and awareness of the world.  The jury point the pageant will quiz the ladies on their knowledge about Okinawa or Asia.  To that end, contestants are studying much on the subject while staying at Okinawa these next couple weeks.

They will visit Okinawa Prefectural Museum  today, Peace Memorial Park tomorrow and then take part in the Naha Matsuri and World Eisa Festival in Naha Saturday through Monday.