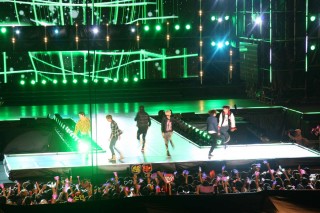 A bevy of the biggest stars in the Korean K-pop scene performed in front of an audience of about 18,000 people on Oct. 18 at Naha’s Okinawa Cellular Stadium, drawing applause and raves from the audience of the unique joint fashion show and music performance.

The event was originally scheduled for Oct. 17 and 18, but the first day ended up to be cancelled, and everything was crammed into one day on Oct 18..

The event features famous Korean groups such as Cho ShinSei, 2 NE 1, KARA and others performing on stage to some 18,000 spectators from Okinawa and mainland Japan who watched the joint music concert and fashion show.

A similar K-pop event was held in March this year, sans the fashion show in front of an audience of 16,000.

This time, the stage was larger and closer, so the audiences could see the Korean stars close, and as a result the audience “went drunk with joy seeing their super stars” according to an organizer’s spokesman.

And also, the stars used the new stage widely, and did big performance.