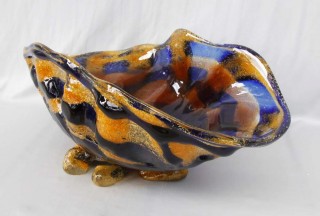 A Ryukyu glass bowl fashioned after a shell on the beach.

The master of Ryukyu Glass on Okinawa, Seikichi Inamine, is showcasing his favorite works at a free exhibition at the Okinawa Institute of Science and Technology.

The 72-year-old artisan, who lives in Yomitan Village, has made it a practice through the years to recycle waste glass pieces, putting his accent on natural colors.  The atmosphere of Inamine’s glass works is warm, very much like pottery.  He describes one of his favorite techniques as “Foam glass” because it shows the atmosphere so vividly.

Through his five-plus decades working with glass, he’s always tried to master new techniques, creating new and varied shapes for glass.  If the hand-technique meets his original sensitivities, the glasses that are born from the cast-off waste bottles give off a beautiful radiance.  He likes the glass texture, which he says conveys warmth much like 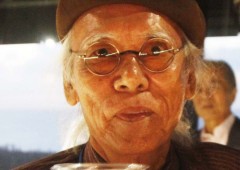 ‘bubble glass’.  He always prefers working with recycled glass bottles, contending he enjoys gi ving them new life through his artistry and skill.

Inamine’s Glass Art Exhibition runs through October 31st at the OIST Skywalk on campus.  OIST is located at Tancha in Onna Village.  With exception of Saturdays, Sundays and Japanese holidays, the exhibition is open daily 9 a.m. ~ 5 p.m.  Admission is free.

He got into the glass business as a glass blower at Okuhara Glass Factory, later joining Makiko Glass, Giyaman Kan and Ryukyu Glass Village.  In 1988 he established his own art studio, “Mid-Air Glass Blowing Studio Rainbow,” and became a member of Okiten, one of the largest art exhibitions in Okinawa.  His first major award came in 1994 when he was designated one of Japan’s ‘Contemporary Master Craftsman’. 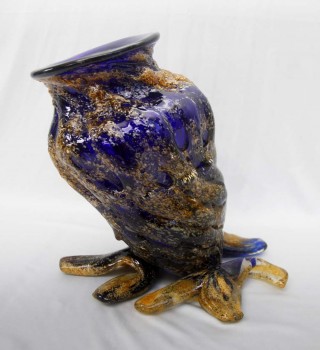 The inspiration of this vase was an octopus.

The awards never have stopped, with Inamine being recognized with the Okinawa Times Art Award, Tochigi Prefectural Cultural Council Prefectural Museum of Fine Arts Exhibition Award, Modern Art Artist Glory Price and even an award from Piombinio (Bionbino) Art Museum in Tuscany, Italy.  Other awards have come from Japan, Stockholm, Sweden and from the Principality of Monaco.