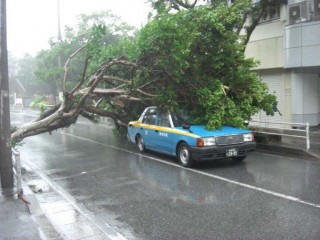 A tree fell on a passing taxi in Urasoe during the typhoon, and although no one was injured, the driver was visibly shaken.

Typhoon Jelawat did last weekend what Samba and Bolaven couldn’t; it slammed into Okinawa Prefecture from one end to the other, leaving one man dead, dozens injured and damages in the tens of thousands of dollars.

The typhoon began its trek northward early Saturday, crossing Ishigaki and Miyako Islands packing winds in excess of 110mph. As it made its way to Okinawa’s main island, the Japan Meteorological Agency recorded a top wind of 139.6mph at 1:20 p.m. Saturday.  Maximumn winds were recorded at 61.2m/s at Higawa district, 58.9m/x at Tokashiki Island district of Tokashiki Village and 57.4m/s at Miyazato district of Nago City.

One fisherman was killed, while 87 people suffered injuries ranging from serious to light, such as getting hands caught in doors.  Officials say the number of injured is the second worst since a 2003 typhoon in which one person died and 93 were injured.  In Nanjo City Saturday, one 85-year-old woman suffered a broken leg after being knocked over by a strong gust of wind. 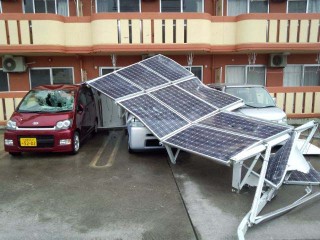 Strong winds ripped solar panel from an apartment building rooftop and threw it on residents’ parked cars in Okinawa City.

Typhoon Jelawat had little use for electricity and power lines, plunging 334,400 homes into darkness as power was cut.  A few areas of the island remain without power today, five days after the storm.  As the storm approached, evacuation recommendations were made to Higashi Village, with 84 moving to safety, and at Nago City, where 4,122 households were told to move.  Okinawa Prefecture says self-evacuations reached 388 people from 30 cities, towns and villages.

The strong winds took cars, and even a four-ton truck and tossed them about like Matchbox cars.  The American military bases had dozens of cars rearranged in parking lots, with a handful flipped over.  One at Camp Kinser was caught in a gust that sent it tumbling from one end of a dormitory parking lot to another.  That incident was caught on video and became a uTube sensation.  In Tokashiki Village, five cars were rolled over.

Roofs were torn from buildings across the islands.  At 21 Century Forest Gymnasium in Nago City, a 15-meter by 5-meter section was blown away, while winds tore roofs off Yomitan Village homes and a supermarket, from buildings on military bases, and at Nouren Market in Naha City, where 80 square meters of galvanized sheet iron roofs were trashed.  In Kume-jima Town, part of the Hotaru Dome used by the Rakuten Eagles professional baseball team was blown away.

Trees fared poorly from one end of the islands to the other.  Along Highway 58 in Urasoe City, outside Camp Kinser, dozens of mature trees were ripped from the ground like small shrubs, blocking the roads.  Utility crews were busy for several days clearing away debris from roadways.