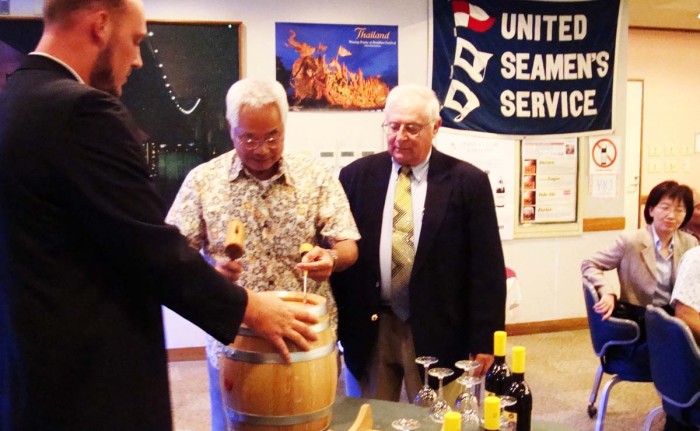 The year’s shipment of Beaujolais Nouveau wines have arrived from France, just in time for the wine’s international debut today.

The third Thursday in November traditionally marks the official debut of the new season’s Beaujolais around the world, and t he Japanese are first to get a taste of the light red wine because of the time zone.  A spokesman for importer Suntory Co. says Japan will import about 7.2 million bottles of the wine this year.  The record for Japan was 12.5 million bottles sold in 2004.

The Beaujolais Nouveau wines will be available in liquor stores and other outlets across Japan after their introduction tonight.  The ‘nouveau‘ is French for ‘new‘ and that is what it is all about. The new red wine made from the Gamay grapes from the Beaujolais grape growing –and thus wine producing– region of France.

It is typically produced 6 to 8 weeks after the grapes have been picked. There is usually very little tanin and the wine is invariably ‘fruity’, although the taste and palatability varies from year to year; this, the unexpectedness, being very much a part of the tradition. Most years it is very light and easy on the tongue. You can drink large amounts in a short period of time.

Christiansen says the Beaujolais Nouveau wines, which this year are reported to have a somewhat fruity and balanced flavor, will be served throughout the evening, and a limited number of bottles is available for immediate sale to guests.  The French wine vintners say the Beaujolais region endured a very warm summer, but climate bounced back in late August to permit wineries to harvest ideal grapes for the wine.  An estimated 65 million bottles of the Beaujolais wines will be consumed over the next couple of weeks.

The Seamen’s Club Naha is located between Naha Military Port and the Okinawa Free Trade Zone on the route to Naha International Airport.  Reservations can be made at DSN 648-7493 or (098) 857-1753.