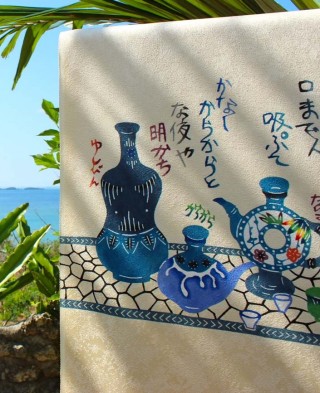 Only days after the Ryukyu Bingata Union began drawing attention to Okinawa Bingata with an exhibition in downtown Naha City, artisan Makoto Fujisaki launched his own exhibition that runs through Sunday at the Okinawa Prefectural Museum & Art Museum.

Admission is free to the exhibition in the Gallery of People.  The exhibition is open 9 a.m. ~ 6 p.m., except Saturday and Sunday when it remains open until 8 p.m.  Makoto Fujisaki is one of the most famous Bingata artists in Okinawa Prefecture, working from his Fujisaki Bingata Studio in Nago City.

He got his start in 1974, and has been busy ever since, winning prizes and awards from the Mayor of Naha City for the Traditional Handicraft Festival.  His products are available for sale both at his studio in Nago City, and also at Tsuboya Handicraft Shop, 1-8-6, Naha City, or at Manza Beach Hotel & Resort in Onna Village.

Bingata dates from the Ryukyu Kingdom, around the 14th century, when Okinawa experienced an influx of foreign goods and manufacturing techniques.  Its origin is believed to be around the 13th century, most likely from a synthesis of Indian, Chinese and Javanese dying processes.  “Bin” means color of crimson, generally, but when people talk of “bingata”, it means various colors.  The “Gata” means various patterns.