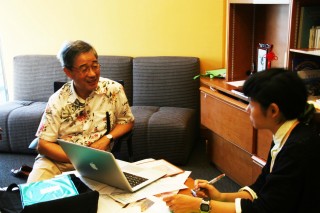 Professor Tadashi Yamamoto sat down in his office at OIST to char about iPS with Japan Update’s Mana Komatsu.

A professor at Okinawa Institute of Science and Technology is keeping a close eye on iPS, short for Induced Pluripotent Stemcells, which he thinks have great potential for finding cures for cancer, cell transplants and study of genes.

Professor Tadashi Yamamoto is with the OIST Cell Signal Unit, where he studies oncogenes, the genes causing cancer.   He’s been studying cancer’s mechanisms, trying to determine why people get cancer, and what types of genes will change form to oncogenes, and how the human body fields genes to create cancer in cells.  Yamamoto thinks that by making clear the mechanism, it can determine facts linking cures, while also further developing medicine as a whole.

A key to the future is understanding the Induced Pluripotent Stemcells, those iPS, and how they have the ability to promote changes in tissue and intestines cells, and how they have special abilities to breed almost infinitely by bringing in four kinds of genes.  Yamamoto’s idol is the man who spent years studying the iPS, and even shared the Nobel Prize in Physiology and Medicine this year for the discovery that mature cells can be reprogrammed to become pluripotent.  Japanese doctor Shinya Yamanaka won the Prize, and he’s incorporated the iPS name in hope the cells spread across the world like “iPod” that became so popular. 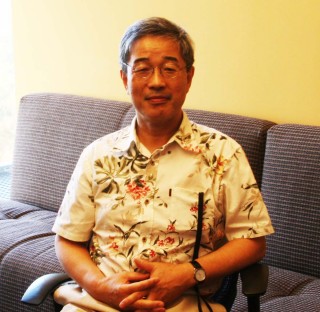 Okinawa Institute of Science and Technology is not currently studying iPS, but Yamamoto thinks the possibility of starting such studies is quite high.  “iPS are really promising cells,” he says.  “We want clear early proof that the cells are not dangerous, but it’s good to be linked to care for life-threatening illness.”  The professor notes “we hope for higher certainty and safety, and in the future I want to use iPS when the cells are likely to link to my study.”

Yamamoto’s studies evolve around Yamanaka’s work.  “I thought Yamanaka is excellent because he studies while considering how to put these cells and his study of iPS to practical use for people,” he says.  He called it the watershed point of iPS’s that they can create cells from somatic cells by themselves.

The professor describes one pluripotent stem cell called ES Cell that have been in existence since before the discovery of iPS’s. They’re similar, he explains, but ES Cells have moral problems and a stigma attached because they’re made from a fertilized egg after fertilization.  iPS’s, on the other hand, can be made from cells using the patient’s own cells such as skin cells, so iPS’s don’t have any moral issues.  On top of that, iPS’s do not cause strong reaction in the body since the patient’s own cells are used, and not cells from someone else.  Those, he says, are superior points of iPS’s.

The  iPS’s are being considered for use in regenerative medicine, including cell transplants, new medicine studies and alternative solutions to causes of known illnesses, and practical medical applications.  Yamamoto says it’s not easy because they have to study the four kinds of genes that possibly come into play in transplants.

One of those four kinds of genes is the gene creating or making cancer, so there’s a possibility genes will themselves become cancerous.  That’s why the need continues for additional research on how to work around the dangerous gene.  At this moment, the problems of the cancer causing gene are basically solved. However, for iPS’s use in humans, Yamamoto says there will be big problems ahead, as well as small problems, so scholars need to study harder.

As an oncology specialist, Yamamoto wants to learn more about how a cancer cell can be changed to an iPS, while searching efficacious medicine for the cancer.  Once a cancer cell from rare cancer patients is converted to iPS, which makes samples of rare cancers readily available in large quantities, various methods of treatment would be developed.

If using iPS’s will permit taking a few rare cell samples from patients and then multiplying them endlessly, it would increase the number of samples and permit more studies of the rare cases more easily.

Yamamoto points out that spermatozoon and ovum can be made from one’s own iPS’s, allowing clones to be made, at least theoretically.  That possibility sets up requirements for discussions about moral discretion, such as discussing those matters in national assemblies and political forums to create ethics committees and rules.  According to Yamamoto, discussion is needed by not only society, but also by individuals.

The professor takes things a step further by saying it’s better not to go regulating on the basis of studies, because there’s a need for advanced studies to determine what’s dangerous and what isn’t.  There shouldn’t be given study rights to whatever nation should control something, and there’s a need to select people who have a good education and good moral background.  In the future, he adds, iPS courses could be made a part of each university’s curriculum, involving people in the humanities to allow studies of the moral side of using iPS.

What’s most easily a potential solution by use of iPS Cells?  Yamamoto tells Japan Update “Nerve illnesses such as Alzheimer’s is easy, I’d think. Bringing and then placing the created cells on the bad cells’ points.”  As he talks, he gets excited and smiles “Sometimes I want to try to use iPS’s myself.  If I have some ideas, I will use it.  Maybe,” he contemplates, “I think it will be soon.”