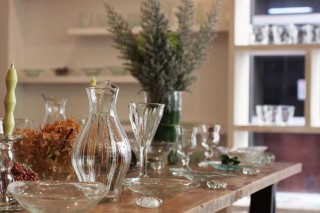 Most of artist Yoshiriki Yamada’s creations are objects meant to be used in daily life.

In today’s modern society, life styles are diversified and traditional handicrafts take a backseat, an action that has ceramic artist Yoshiriki Yamada concerned.

He’s a believer in maintaining links between the Ryukyu Kingdom’s colorful past and the Okinawa Prefecture of today by learning about the traditions of ceramic art which have been with Okinawa for centuries.  His “Yoshiriki Yamada – Modern Ryukyu II – Vessel Exhibition opens Saturday at Garb Domingo in Naha City, and runs through November 25th.  Admission is free.

Yamada’s focus is on what the vessels are which turned to the ‘origin’ of excellent traditional ceramic art.  His exhibition and sale of vessels and jars which suit modern life and were produced by him in the Tsuboya district of Naha, shows the power of the ground and food.  Yamada says he tries to express what he’s seen and heard as an art form tinged with passion.  The idea, he explains, is to help everyone rediscover the charm of Okinawa from a different angle.

Yamada was born here in the early 1970’s, graduated from Okinawa Prefecture University of Fine Arts graduate school, and began 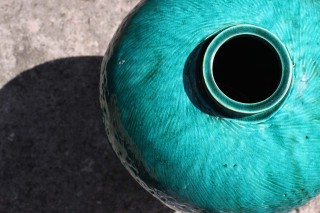 Bold colors are one of Yamada’s trademarks.

working in Yomitan Yamayaki as an apprentice.  When he became independent, he established Tsuchibito, his own pottery studio, in the mid-2000’s.  Tsuchibito means ground, fire and human.

Garb Domingo is an interior shop featuring table wear and stationary selected from Okinawan ceramic vessels or glass ware.  Most are simple and modern.  The shop is located in the middle of the Tsuboya area famous for Okinawa pottery.  Artisans in the Tsuboya district often hold exhibitions like Ryukyu Modern II because they support local arts. 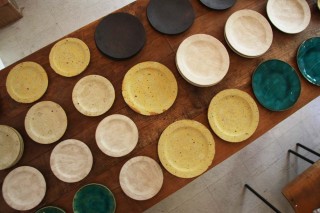