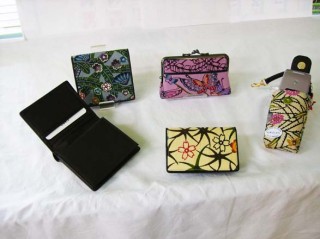 Purses and vallets made of bingata are popular suvenirs from Okinawa.

he 36th Ryukyu Bingata Union Exhibition is setting up housekeeping in the Naha City Culture Tenbus Hall today for a four-day exhibition of the classic Okinawa fabric and design.

Admission to the Bingata Exhibition is free at the 3rd Floor Gallery at Tenbus Hall.  For many visitors, there’s the question “What is Bingata?”

Rykyu Bingata is an Okinawan traditional resist dyed cloth, made using stencils and other methods. It is generally brightly colored and features various patterns, usually depicting natural subjects such as fish, water, and flowers. Bingata is worn during traditional Ryūkyū arts performances and historical reenactments.

Bingata dates from the Ryūkyū Kingdomperiod, circa 14th century, when the island of Okinawa experienced an influx of foreign goods and manufacturing techniques. The origin is presumed to have been sometime around the 13th century. 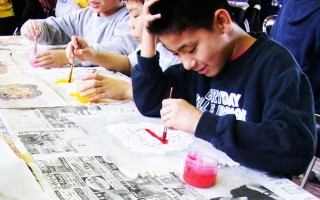 It is believed to have developed as a synthesis of Indian, Chinese, and Javanese dying processes. “Bin” means color of crimson generally, but when talking about “Bingata”, it means various colors specifically. “Gata” means  various patterns.

Ryukyu Bingata is traditional-handicrafts article only dyed goods of Okinawa which is automatically cherished in climate peculiar to Okinawa, and has an original technique. The splendor of the refined colorfully-dyed pattern has received high evaluation from the outside of within the prefecture also in the art.

This week’s exhibition is based on the tradition technique of a colorfully-dyed pattern on the theme of “Fehiru ~Grey color~”, keeping in mind the proposal of the work which can be employed efficiently in the present age.  The Ryukyu Bingata Union strives to improve quality, and create quality workmanship in the work, which many people prefer to a kimono, and can utilize in everyday life.

Moreover, it prepares the Japanese wrapping cloth to be used  on various scenes as a plain article. This annual union exhibition has been enjoyed in past years, and promoting the event to draw in/ more people this time is the Bingata Union goal.