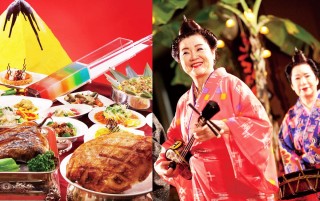 Golden Buffet and Okinawan folk performance by Yoriko Ganeko are on the menu on Tue, Thu, Sat and Sun through December.

Season’s greetings are coming just a little bit early at the Renaissance Okinawa Resort, where management is linking the holiday season with holiday celebrations.

The Renaissance is so excited about its 25th anniversary, it decided not to wait until 2013 to get the special events rolling, choosing instead to start this month.  It’s not a short-lived celebration, though; it will run all the way through 2013.

This month, dinner at the international cuisine restaurant Golden Buffet is featuring live folk music performances by Yoriko Ganeko and her group.  Showtime is 5:30 p.m. and 7:20 p.m. Tuesdays, Thursdays, Saturdays and Sundays through December.  Each performance is 50 minutes long.  Those dinners are ¥4,680 including the show cover charge. 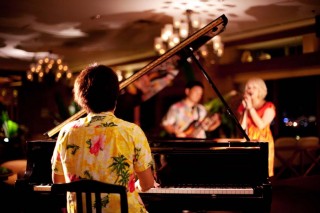 Jazz & Chocolate is on tap through the Christmas holidays.

The holiday season at the Renaissance Okinawa Resort is always something special, with fantastic lighting including the blue illumination dolphins and the blue and white lights which began their holiday run a few days ago.  Visiting the resort is easy, taking Route 58 north toward Onna Village.  Look for the Renaissance Beach and Renaissance Okinawa Resort signs on the left side.  Reservations are available at (098) 965-0707.