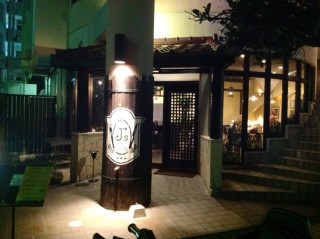 J’s Wine & Deli is on the street level, and easy to find.

A gal who took her first stab into the marketing and club business seven years ago with Okinawa’s first metropolitan-chic martini club is at it again, drawing on her experiences to team with an older, established company to create J’s Wine & Deli.

Entrepreneur Miko Liggayu was a 21-year-old when she first opened the NiCHe Martini Chatan wine bar in Chatan in 2005.  She’s more experienced now, and is joining forces with a veteran food and beverage holding company, Lequios Japan Corporation, to bring forth her new concept based upon her experiences.

“We named the bar after our stock exchange code,  J’s Wine & Deli is under the food and drinks division of our company based in Tokyo for over two decades,” says partner and Lequios Japan Chief Operating Officer Ryuichi Suzuki.  “Our expertise in international and domestic trade and supply finally gave us the opportunity to develop industries in food, beverage, and retail merchandising in Okinawa.”  Suzuki says there’s more to it, as “we recently became a concessionaire partner of AAFES in multiple locations,” praising Liggayu’s urban concepts.  He promises that “together it’s something we can both offer to a niche market of Okinawa.”

Miko Liggayu doesn’t sit still, at least not often. She’s also the vice president of a 15-year pioneer multi-telecom and satellite service company serving the U.S.~ SOFA community.  In that, she’s following in the footsteps of her mother, Rose-Liggayu Raymundo, the president of Fad-Tech Sales & Service.  With a seemingly endless abundance of energy, she’s also a volunteer in community organizations, including a high visibility role with the American Chamber of Commerce in Okinawa.

“J’s is actually in the role of maturing of what NiCHE started, paused and is now ready to continue,” she explains.  “We’re very grateful to be part of the future development of the food and beverage industry in Okinawa.”  Facebook has more information at /jswines.

Liggayu’s goals are special events to be held weekly, monthly, quarterly and annually at J’s Wine & Deli.  “It’s a place to meet for the stilettos prior to your next club agenda,” she says, and “the dress code is Casual Chic; no ball caps, reef sandals, and smoking is restricted to outdoors.” 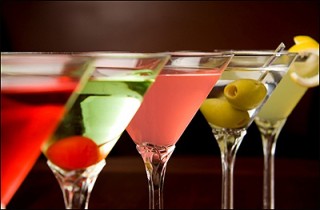 “NiCHe served more than 60 classic twists and modern martinis, as well as some old-fashioned mixed beverages, and a shy 6-8 regular wines,” Liggayu explains of the differences between her first venture and this one.  “Here at J’s, it’s the opposite with over 120 varieties of wine available by the glass, bottle or for merchandise purchase. You’ll also find a collection of Grappa, Porto and Sherry in addition to scotch, martinis and occasional cigars.”  She calls J’s “a definite place for the romantics and robust palates all shared in a very relaxed atmosphere. Tapas Happy Hour, charcuterie board, Course Dinners or ala carte are offered six days a week, and lunch will be served starting next spring.”

Liggayu promises that “we are introducing J’s intimately by hosting holiday bonenkai and shinnenkai, with reservations required now through January 20th.  The place also aims to become a hub for baby showers, engagement parties, and we’ve a corporate conference room, fully equipped as a business center.”

J’s Wine & Deli is located on a narrow one-way alley parallel to Hwy 58 across from Camp Lester, just behind Volvo Military dealership.