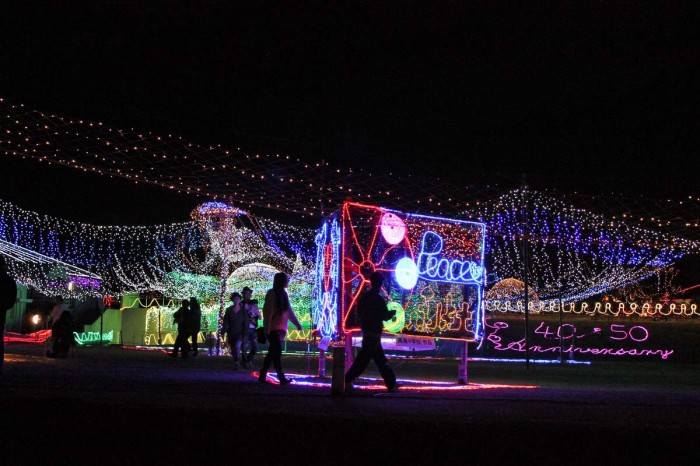 Okinawa is alight for the season with illuminations glittering in several locations around the island. The largest is the ‘Itoman Peaceful Illumination’ that runs through Jan. 3 at Itoman Tourist Farm.

Colorful lights are twinkling and casting their glow off the night skies of Okinawa, a sign that Christmas is just around the corner.  Holiday lights are traditional, and here, the illuminations are fantastic.

The 14th Itoman Peaceful Illumination is now in progress, and runs through January 3rd, but at a 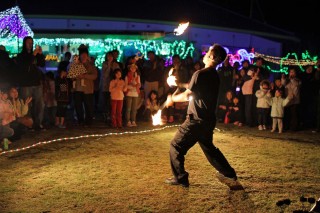 Lights of peace, the Itoman Peaceful Illumination, is an event entrusting the prayer for peace from the ground of the Battle of Okinawa ending, and through illuminations, it send greetings to the world. More than 1.3 million miniature lights are being lit in Itoman City December 17th, site of where the 1945 Battle of Okinawa came to an end. Organizers call the festival an event “sending to the world Okinawa’s prayers for peace.” 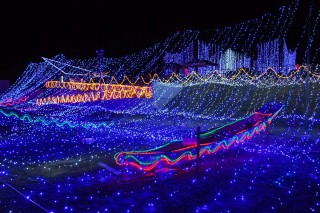 Sabani on the ocean is the theme of this illumination at Itoman Tourist Farm.

Lights will be illuminated daily from 6 p.m. ~ 10 p.m. through January 3rd. More than 120,000 visitors are expected during the illumination run. Two live concerts are slated for Christmas eve and Christmas night and another on New Years Eve, with fireworks on Christmas 9 p.m. and midnight New Year’s Eve. A New Year’s countdown will be broadcast live on Okinawa television.  Green Note Coaster performs Christmas Eve, Kiiyama Shoten, SASA and others on Christmas, and Ryu-T Unit on New Year’s Eve.  All live performances are 7 p.m. ~ 9 p.m.

Even as the Itoman Peaceful Illumination is set to begin, plans are being finalized for the 34th Mabuni Fire & Bell Observance New Year’s Eve into New Year’s Day. The ceremonial festival takes place at Okinawa Peace Memorial Hall, which also stands in Mabuni, with prayers being offered to the 230,000 who died during the Battle of Okinawa. Just before the new year arrives, moments before the stroke of midnight, the flame of prayer will descend from the 45-meter-high bell tower to light participants’ torches as they welcome in the new year.

As a choir sings, the Bell of Peace is rung as participants light the large flame holder with their torches. It’s a solemn, chilling festival that’s not to be missed.

Drives around the island will produce dozens of businesses who’ve lit up their properties for the holiday season, and hotels are turning up the lights, too.   Itoman Candle Night runs Saturday through Christmas Eve on Monday at Street Station Itoman.  The candle which wrote the message of peace is burned, and provides a terrific vision.  The tree made of PET bottles will also be turned on, and the city is simultaneously holding a candle vigil.  Candles are set at 5 p.m. and lights are on 6 p.m. ~ 9 pm. each evening.

Kanucha Bay Hotel and Villas’ holiday display is worth the drive up Highway 58 to the north,

where its eco-sustainable style of holiday lighting is in place daily from 6 p.m. The lights go on with a grade switching-on ceremony each afternoon at 5:55 p.m. The hotel complex has a giant 12-meter Christmas tree, plus an outdoor display of more than 100,000 colorful lights.   The Kanucha Resort is greeting the new year with its 15th anniversary, and has upgraded its Stardust Fantasia “world of light” with this year’s theme, The Time for Paradise.  The 106 days are divided into four seasons, and the resort has prepared various events and contents so the expression and mood, which are different each season, can be enjoyed.

Renaissance Resort uses 80,000 LED lights to create a school of porpoises and other illuminations that can be enjoyed through Feb. 14. 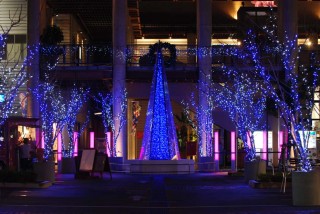 Renaissance Resort Hotel Okinawa, not to be outdone, has its beach illumination each day through February 28th, outdoors.  It also has a 15-meter tall tree. The general public is invited to visit and view the illuminations throughout the holidays, and on through February. There are more than 80,000 LED lights and 13 brilliant blue porpoises who dance on the surface of the water in the swimming pool.  The Ryukyu Renaissance, which united with the old Ryukyu style, recognizes the Resort’s 25th anniversary.

Winter Elegance 2012 in Ashibina is the theme for the holiday season at Okinawa Outlet Mall Ashibina.  Admission is free for the evening illuminations, which run 5 p.m. ~ 8:30 p.m. through February 14th.  The illuminations are an everyday practice, and visitors who come often can have photographs taken in front of the ‘Queen Gimlet’, which is the symbol of the illumination.

Hotel Nikko Alivila has its patio illumination running from after sunset through midnight, through March 31st.  Admission is free.  A Christmas tree is in the patio area until Christmas day.  It’s a popular illumination centering on the courtyard, using the warm light of LED electric bulbs, which are environmentally friendly power sources. 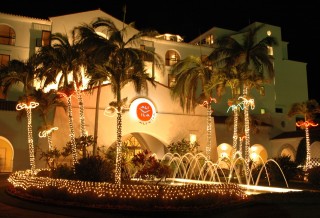 Motobu Town takes the prize for the largest illumination display on the island as they have lights over a whole mountain.

Motobu Town is illuminating its own circle corn karst hill during this holiday season. The huge scale illumination attracts everyone, and glows with extravaganza.  Some natural circle corn karst exists in Motobu Town, and they’re only at Motobu Town.  The karst looks like a hill or mountain, but are actually limestone rocks under the ocean 200 million years ago.  Now they’ve uplifted to land, and been melted by rain or wind over a long period.

The Motobu Town event began about ten years ago, as the committee association of circle corn karst in Motobu began the illumination to promote the community and draw attention to the unusual geography.  The Illumination, which runs through the end of January, is in the Yamazato district in Motobu Town, toward Yamazato from Motobu Elementary School.

Christmas Fantasy is open this weekend at Okinawa Zoo Park, complete with tons of snow.  The year’s first snow will be December 22nd, the opening day of the 17th annual Okinawa Zoo Park Christmas Fantasy.  The six-day holiday special event will feature a taste of real winter, as fantasy creators open a couple of kamakura snow cottages, a Japanese style igloo, to give everyone a chance to experience the cool feel of snow.