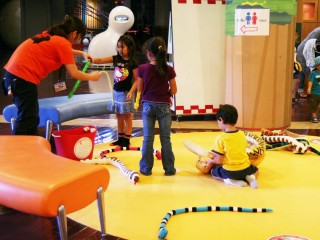 Children’s play area is prepared with toy snakes and other items related to the reptiles.

The Wonder Museum at Okinawa Kodomo no Kuni is venturing down a somewhat different path  from now through January 27th, wanting to introduce visitors to snakes from both a cultural and biological side, and considering that 2013 will be the year of Snake.

The Orange Room at the exhibition allows visitors to play with toy snakes, or look for imitation snakes inside a box.  Visitors can see firsthand how snakes have been around for millenniums, and been close to humans and life from cultural and mythical perspectives through history.

For example, Jyaguchi means ‘faucet’ in Japanese and comes from the word ‘snake’ 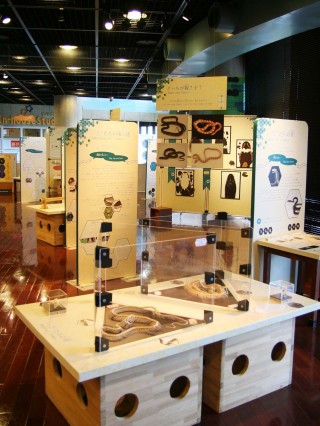 Everything related to snakes is on display.

and ‘mouth’.  Chyouda means ‘long queue’ in Japanese, drawn from the words ‘long’ and ‘snake’.  It’s been said that a sacred rope or Kagamimochi shape comes from the snake, which decorated the Pharaoh’s head with holiness in ancient Egypt.  All the way back to Adam and Eve in the bible, the snakes had a role.

In the zoo’s Museum Blue Room, guests can study “biological parts of a snake with a touchable sample”. There are also photographs and explanations of the totally different body system, biological system and comparisons to humans. There’s also a touchable set of actual snake bones, as well as information about venomous snakes and a series of beautiful snake pictures taken by professional photographers. 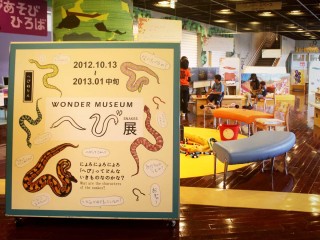 The wonder Museum celebrates the coming Year of the Snake with an exhibition that runs through Jan. 27.

Admission to the Snake exhibit in the second basement of the Wonder Museum in Okinawa Kodomo no Kuni is ￥400 for adults, and ￥200 for high school and junior high school students. ￥100 for kids ages four through elementary school, and younger are admitted for free. Admission to the Wonder Museum itself is ￥200 for adults and ￥100 for all kids ages four through high school. Children under three are free.