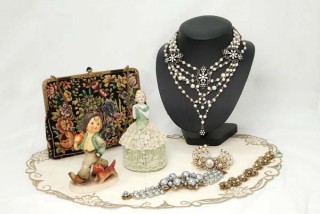 Antique jewelry and other items from the Victorian era England will be on exhibit and sale at Ryubo Department Store in Naha starting Tuesday.

The Ryubo Art Salon is the venue for an ‘Antiques in Victorian Era’ Exhibition’ and sale set to open on Tuesday.

It is an exhibition sale featuring antique products in the Victorian era,1837-1950s, such as jewelry, bags, tablecloths, Susie Cooper, Wedgewood, etc. It is carried out as the 7th anniversary of a specialty shop “Charmant”, which imports antique products from overseas and sells them in the Okinawa prefecture.

The Victorian Era is the period of 1837 to 1901 when Queen Victoria was reigning over Britain. The economy of this era had a huge development because of the Industrial Revolution. The era is well-known as the golden age in which a lot of excellent art productions and literary works were created.  It is considered that this was the golden days of the British Empire.

It is said that the Victorian era is the special time of getting caught up in the nostalgia, romance and wrongs and inconsistency, of a most British time.

Products which people in middle and upper class of this era used such as china, furniture, miscellaneous goods, etc. are very valuable as antiques.

The event runs from Tuesday through Monday, April 8th, from 10:30 a.m. ~ 8 p.m., except on closing day when doors are shuttered at 5 p.m.  Admission is free. Ryubo Art Salon is located on the 7th floor in Palette Kumoji, on the south end of Kokusai Street.