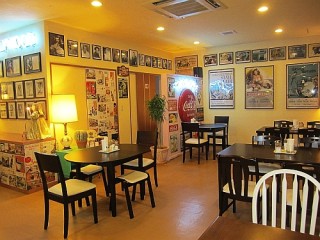 Everything in the 50’s Cafe is authentic Americana.

There are burgers, and there are really great burgers

Hayashi Oshiro knows the difference, and has opened a new 50’s Café to make it easier for Americans to enjoy his creations.  The restaurant is touting not only burgers, but a menu featuring a French toast plate, pancake plate and a shrimp, basil and saffron flavor fried rice, each for only ¥700.  Of course, Oshiro points out, “you can always enjoy my burgers. They’re made to order, fresh, every time.”

The 50’s Café is a flashback into 50’s Americana, right down to the finest 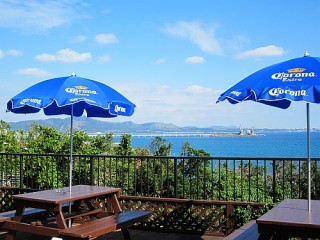 décor detail.  Oshiro, who used to mingle with the stars as he worked in California, has decorated both his 50’s Cafes with authentic memorabilia, signs, bottles and license plates.  He’s plenty of posters, photographs –autographed, of course—by the likes of Pat Boone, Dustin Hoffman and Kirk Douglas.

His love for America began as a youngster in Okinawa, when he recalls the island was seemingly a part of the United States.  Oshiro says he felt how different the lifestyles of Okinawa and America were, even as he experienced the two cultures.  Everything was fresh to him; television, movies, magazines, 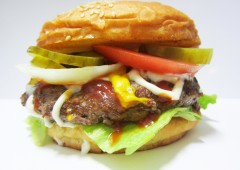 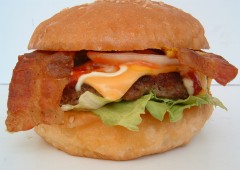 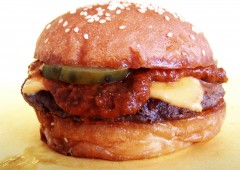 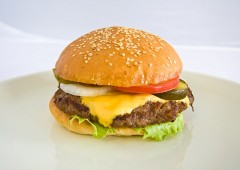 advertisements and even electronics spurred his dreams of going to America.  He landed in California with big dreams, his American Dream, as he started a limousine service.  He saw there wasn’t one run by Japanese, and it was his niche.  Japanese were starting to make money in America and felt comfortable using Oshiro’s limousines because he spoke Japanese.

Oshiro picked up a hobby while driving; he started collecting antique items, souvenirs, memorabilia from the movies.  That’s the décor at his 50’s Café.  Old time Americana, with a down home feel.  And of course, the American burgers.  He’s mastered the burger, so to speak, offering four different American classics.   Prices are reasonable, too, with the original burger only ¥430 and the hefty bacon cheeseburger a mere ¥650.

He touts the “100% pure, fresh beef that is never been frozen, and has no fillers. The perfect burger,” he says, “is grilled to order, covered with melted cheese, then put on a butter-flavored oil toasted bun, piled high with hand leafed lettuce, fresh sliced onion, pickles and tomato, and served up piping hot.” The burger is Oshiro’s most popular, with 2/3 pound of meat and some savory bacon filling the bun.

Stepping into the 50’s Café is déjà vu, a quick step back into 50’s Americana.  The décor is 50’s, and so is the music.  Nostalgia and memories come flooding back as customers sit and enjoy a meal.

The 50’s Café has incorporated a touch of California’s Hispanic dishes with tacos and chili dogs, and a trademarked dish Oshiro developed.  Burrito rice is a specialty with a taste simply out of this Okinawan world.  Pure minced ground beef, onion, tomato and chile cook up into a spicy, full-bodied burrito rice dish, accented by a combination of cheeses.  “If you like curried rice,” says Oshiro, “you’ll fall in love with our Burrito Rice”.  He’s making the 50’s Café the best burger joint on Okinawa.

Although the 50’s Café is a bit tricky to get to, the trouble is well worth the effort. From Camp Courtney drive towards Ishikawa. Passing the Tengan pier, turn right at the first traffic light next to a golf driving range, go down the hill a couple of hundred meters and turn right. There’s a sign at the turn. The follow the signs towards the ocean front. Parking is in front of the café.