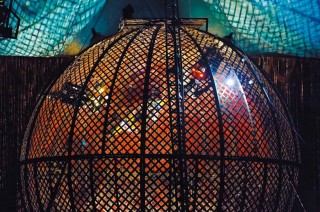 It is still possible to see three motorcyclists race inside a wirenet globe in Kinoshita Circus’ exciting performance in Okinawa until Feb. 3.

It’s called a death-defying motorcycle globe, so named because three highly motivated motorcyclists are racing around inside the sphere at high speeds.  Simultaneously!

Not an action that fits normal motorcycle safety admonitions, but one of the events that makes the Kinoshita Circus, the world’s third largest, an afternoon not to be missed.  With little more than a week to go before the circus strikes the big top and moves on, there are still several opportunities daily to take in the two-hours-long program, which includes those motorcycles.

The motorcycles inside the sphere run along the inner wall horizontally and perpendicularly, round and round.  Then they kick up the excitement level, with two running horizontally in a line while the third runs perpendicularly.  The challenge is exquisite timing so they don’t collide.  Says one driver:  “It is important to keep the same speed.  I take care about a partner’s sound and position.”   He says he sometimes got drink when practicing the first times, as the thrill level was high.   Now, he explains, “I want audiences to watch with a feeling of nervousness about colliding in the sound of force and the smell of oil.”

The Kinoshita Circus runs through February 3rd, with advance general admission free seating tickets ¥2,400 for adults and ¥1,400 for kids.  The tickets are first come, first served.  Special ringside seats are available at an extra charge.  Since many of the shows have been sold out especially on weekends, patrons are advised to come on weekdays when possible and arrive early. The circus big top tent is at Toyosaki Town, 3-35 Toyosaki, in Tomigusuku City.