Mori no Nigiwai captures essence of Okinawa past 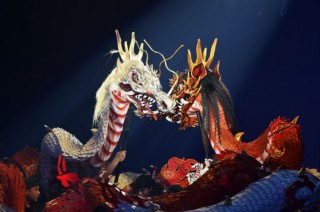 The show includes plenty of more exotic aspects of Okinawan traditions whith a strong influence of the Chinese culture evident.

The Mori no Nigiwai initially began with the concept of unearthing and rediscovering various festivals and performing arts that were slowly being lost, forgotten or left behind as Okinawa moved into the 20th century.

Meticulously devoted Okinawans dedicated themselves to gathering all of the pieces from various times and places, then displaying them in a single location for people to enjoy as a trip down memory lane.  Over the years, the event has increasingly taken on a regional revitalization necessity, and has expanded across Japan, protecting and nurturing traditional cultures of various regions and contributing to the support of artistic activities of young people engaging in original and creative performing arts.

This weekend, the cultural experience of Mori no Nigiwai Okinawa presents Full of Brilliance & 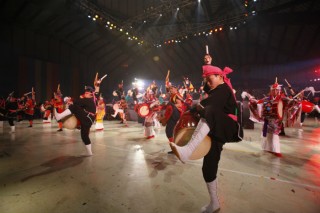 Splendor: The Inspiring Ryukyu Ranman Hana Emaki as the Mori no Nigiwai Okinawa celebrates its 30th anniversary of performances here.  Shows will be at the Okinawa Convention Center Event Hall in Ginowan Saturday and Sunday.  First shows see doors opening at noon and performances at 1 p.m.  The second show each day has doors open at 4 p.m. and the performances at 5 p.m.  Advance admission is ¥2,000.

Nori no Nigiwai Okianwa has been captivating audiences for years with new, original content.  This year’s Ryukyu Ranman Hana Emaki is a production of traditional performing arts of Okinawa with a focus on classic Ryuo dances mixed with other highly entertaining performances.  This year’s performance is created by the weaving of lights, sounds and Okinawa’s performing arts.  Eisa, Ryukyu no Mai, and the Great Dance of Yotsudake are some of the dynamic performances at the 121st Mori no Nigiwai Okinawa.

The powerful and impressive Shuri castle stage comes to light as the enormous stage production features a recreated Shuri castle, the symbol of prosperity and splendor of the Ryukyu Dynasty.  A select lineup of performing arts from Ryukyu Buyo, the dances can be said to be the heart and essence of Okinawa’s performing arts.  There will also be folk performances and various original pieces created in the past three decades.

At the food stalls set up next to the venue, there will be popular aji, or tastes of Okinawa, to enjoy.  The food service is available before the show, allowing visitors to savor the Okinawa Soba noodles in soup, and Okinawan style deep-fried tempura.