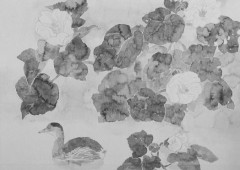 Ichiro Kikuta brings the nature of Yambaru in Okinawa to life painting in a single color to a folding screen of handmade Japanese paper.

One of the most famous ink  wash painters in Okinawa, is bringing his monochrome technique to an exhibition at the Urasoe City Art Museum beginning on Wednesday.

Ichiro Kikuta is well known for capturing the nature of the Yambaru in Okinawa, bringing it  to life by a monochrome painting to a folding screen with handmade Japanese paper.    He and his ink wash paintings exhibition will be on display for five days between the 6th and February 11th.  Admission to the exhibition, which runs daily 9:30 a.m. ~ 5 p.m., except a 4 p.m. closing on the final day, is free.

Kikuta began his art career patterning his studies and style on the Yamato ink wash painting style which Sotatsu Tawaraya perfected in the early stages of Edo.  Kikuta opened his own studio in Ada, Kunigami Village, in 2006.  Much of his style surrounds the meditation concepts, which both East and West drew upon through the ages to understand meditative states, including yoga and zen.  His perspective of meditation was to bring visualization of meditation.  Once the Industrial Revolution hit, the modeling principle became a major method of gaining artistic focus.  His drawings in India Ink and the folding screens are most popular.