Uruma City brings out the bulls on Sunday 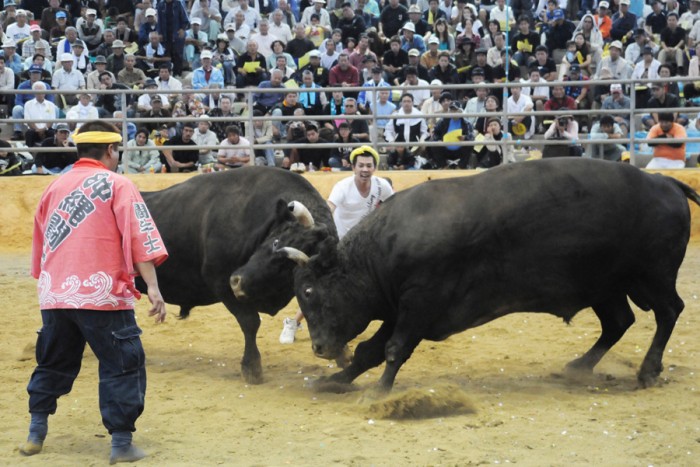 It’s a bull against bull in Okinawan bullfight tournament when two beasts weighing more than 1,000 kg face each other.

Bullfights in Okinawa aren’t like those in Spain or other countries, but the excitement levels reach much the same pitch in Uruma City’s Ishikawa Dome, where the bulls will be the main attractions Sunday.

Here, bullfighters take the sides of the bulls during the battle, encouraging his bull to greater achievement.  One bull, one handler.  Matches are settled within a few seconds from the start, usually, although some can stretch to an incredible 30 minutes.  Bullfights are decided when one of the bulls turns tail and runs, opting out of the battle.

Until that happens, bulls work through a variety of offensive and defensive maneuvers called by the handlers. 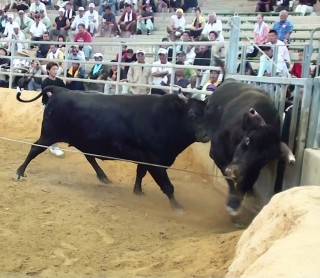 The fight is over when one of the bulls decides he’s got enough and turns tail.

One of the dynamics is timing on the part of the handlers, who anticipate what the bulls are doing.  The best part, say bullfighting officials, is that bulls are alive and well when leaving the ring after the matches.

All seats at bullfights are pretty much non-reserved.  To feel the force of bullfighting, most people try to get to the Ishikawa multi-purpose dome early enough to get a front row seat.  Some officials, however, recommend avoiding the front row, choosing instead the 3rd to 5th rows.

Teams of referees from the Okinawa Bullfighting Association sitting on special seats make the judgments.  Winners are shown with a red or white flag with one of the bulls assigned white, the other red marks.

Admission to the bull fights Sunday at 1 p.m. are ¥3,000 for general seats.  Ten matches will be performed, all using Okinawa bulls weighing 800~1,000kg.  For the title match, the two bulls will weigh in at more than 1,000kg each.

To get to the Ishikawa Dome, take Highway 58 north from Kadena.  Past the Renaissance Resort, take the road to Ishikawa, Road 73.  Ishikawa Dome is on the left between the road and the Okinawa Expressway.