Valentine’s Day is time for romantics 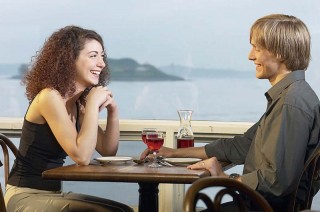 Valentine’s Day is the time for lovers that businesses do not fail to take an advantage of as they offer romantic getaways, dinner specials, chocolates and wine.

Romance blooms unfettered in February, and seemingly, there is no one exempt from the love bug.

Love flows eternal on St. Valentine’s Day, coming up next Thursday, and no couple is immune. The history of Valentine’s Day — and its patron saint–remains shrouded in mystery. Valentine’s Day as we know it today contains bits and pieces of both Christian and ancient Roman tradition, and is wrapped in folklore.

Almost everyone would probably agree that Valentine’s Day is the most romantic day of the year. In Western countries, chocolate and flower shops do their briskest business of the year as men buy sweets and flowers to their sweethearts.  Companies like Hallmark eCards put out loving cards to pair with many other gifts.Count Japan into that buying frenzy as well.  Chocolates are a ¥75 billion industry here, with this lovers’ day accounting for about 16% of annual chocolate sales.

That wasn’t the cases five decades ago, says Kunio Hara, president of Mary Chocolate Co.  His was the first Japanese company to embrace the Valentine’s tradition, giving it a shot in 1958, when he managed to sell three bars of chocolate as gifts.  The February 14th day here in Japan is a day for women to give their men chocolates, with the reciprocal day, White Day, coming a few weeks later.

Major Japanese confectioners, including Meiji Seika Kaisha Ltd., and Morinaga & Co., recognized the lucrative sweets-for-the-sweet market opportunities and jumped in in 1964.  Chocolatiers say women even use the Valentine’s Day as an opportunity to make their own chocolates purchases for their own use.
So, who was Saint Valentine, and how did he become associated with this ancient rite? Today, the Catholic Church recognizes at least three different saints named Valentine or Valentinus, all of whom were martyred.
One legend contends that Valentine was a priest who served during the third century in Rome. When Emperor Claudius II decided that single men made better soldiers than those with wives and families, he outlawed marriage for young men — his crop of potential soldiers. Valentine, realizing the injustice of the decree, defied Claudius and continued to perform marriages for young lovers in secret. When Valentine’s actions were discovered, Claudius ordered that he be put to death.
Another legend portends that Valentine actually sent the first ‘valentine’ greeting himself. While in prison, it is believed that Valentine fell in love with a young girl — who may have been his jailor’s daughter — who visited him during his confinement. Before his death, it is alleged that he wrote her a letter, which he signed ‘From your Valentine,’ an expression that is still in use today.
Although the truth behind the Valentine legends is murky, the stories certainly emphasize his appeal as a sympathetic, heroic, and, most importantly, romantic figure. It’s no surprise that by the Middle Ages, Valentine was one of the most popular saints in England and France.
Regardless of which myth or theory one subscribes to, it is known Valentine’s Day began in the time of the Roman Empire. In ancient Rome, February 14th was a holiday to honor Juno. Juno was the queen of the Roman Gods and Goddesses. The Romans knew her as the Goddess of women and marriages. The following day, Feb. 15th began the festival of Lupercalia.
The lives of young boys and girls were strictly separate. However, one of the customs of the young people was name drawing. On the eve of the festival of Lupercalia the names of the girls were written on a slip of paper and placed into a jar. Each year boys would draw a girl’s name out of the jar and would then they would be partners with each other during the festival. Sometimes the pairing of the young people would last a year and they would later fall in love and marry.
Today, Valentine’s Day is celebrated as an expression of affection–or love–between a couple. The tradition transcends countries and cultures, although the question of whether the man sends the Valentine, or whether the female companion generates the special feelings. Charles, the Duke of Orleans sent the first Valentine’s card in 1415 to his wife while he was imprisoned in the Tower of London. Cupid, the essential feature in Valentine’s cards was originally the son of Venus, the Roman god of love and beauty.

On Okinawa this Valentine’s Day, it is easy for couples to share their special moments. Valentine’s Day means more than one billion mushy, romantic cards being mailed and hand delivered around the world.  It’s the most romantic day of the year, where stores generate 16% of their annual chocolate sales, and when flower shops have the busiest day of the year, most notably in red roses.

Here on Okinawa, Valentine’s Day will be no exception.  Across the island, and on all the bases, specials of one sort or another are being offered up. If you can’t get into the romantic spirit with all that’s available, you could be labeled as a ‘Baah! Humbug!’ person.  Knowing that’s not your intent, pick and choose where to take that special person for a day, or an evening, of romantic spirited fun.

The Seamen’s Club at Naha Military Port makes it really easy; its Valentine Sweetheart Dinner runs two days: Valentine’s Day the 14th from  5 p.m. ~ 10 p.m., and again on Friday the 15th, offering a gourmet dinner for couples, complete with wine, chocolates and a rose for the lady.  Reservations are recommended for whichever night’s most convenient [DSN 648-7493 or Commercial (098) 857-1753].  The culinary experience begins with Alaskan Salmon Chowder and baby leaf salad with ham and melon, then moves on to the entrees of Sea Bass con salsa and Pork Tenderloin Medallions with Cherry Sauce.  Chocolates, Tiramisu and Mignliardise, wine and coffee round out the meal.  The couples dinner is $56.95, but the Seamen’s Club even has a singles version of the Valentine dinner for $35.95.  The Seamen’s Club is located next to Naha Military Port, just before Naha International Airport.

The Kinser Surfside has a family-oriented Sweetheart Buffet from 5 p.m. ~ 9 p.m. on the 14th.  Enjoy music and family dancing, and best of all, reservations aren’t required.  The Butler Officers Club on Plaza Housing has an Ohana Night Hawaiian Buffet the 14th, and prices are cheap; $7.95 for adults, $3.95 for kids, and free for children under five.

The Butler Officers Club throws its big “Be Mine Tonight” dinner on February 15th, starting at 7 p.m.  A six-course meal with cocktails gets under way at 6 p.m., with tickets $50 per person.

On Kadena Air Base, there’s a bit of something for everyone during the Valentine week.  Emery Lanes is featuring a Valentine’s Day Special, while ITT’s Valentine’s Buffet Dinner takes place the 14th at Southern Beach Hotel.  The package is $77 for adults, $39 for kids 7-12, $19 for children 4-6, and $5 for ages three and under.  The Teen Center’s Romantic Night is tomorrow night 6 p.m. ~ 11 p.m., and the Youth Center’s Sweetheart Ball is the 15th.

The Valentine Weekend Package at Okuma is set for the 15th ~ 17th.  The per couple price is $175 for a studio or studio premier unit, $195 for a suite or suit plus, or $355 for an Ai Beach Cottage.  The package includes accommodations for two nights, a four-course gourmet dinner for two on the 16th, and a glass of wine or non-alcoholic champagne, and live entertainment.