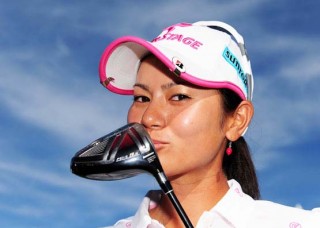 Ai Miyzato ended up second after bumbling badly in the last round.

Ai Miyazato had everything going for her in Phoenix at the LPGA Founders Cup, only to falter on the 16th hole and surrender the victory to Stacy Lewis.

The Okinawa golfer had started the event last Thursday by grabbing the lead with a tournament record 63.  She slipped Friday, but was seemingly firmly in control Saturday, heading into Sunday with a four-stroke lead.  Her rival, Stacy Lewis, was coming off a victory in Singapore two weeks earlier, and demonstrated tenacious play after a disastrous third round in which she picked up a two-stroke penalty that pushed her farther behind Miyazato.

The 28-year-old Lewis began edging closer following Miyazato’s double bogey after a flaky approach that left her with an unplayable lie in the desert.  She opted to use a pitching wedge, but “My shot was like totally in between clubs.”  She said “I hit the pitching wedge, but my instinct said it was an easy 9 so it was a little bit indecisive and that’s why I pulled my shot.” Her decision not to play from the fairway, dropping in the sand instead, was her downfall.

“I decided I would take a drop almost like in a bunker position and I thought that we had a little backstop behind the pin, so I thought I could make it stop a bit more.”  It didn’t work that way, and “It was kind of a little flat when I dropped, so it was hard.”  Lewis was stunned.  “I was shocked that she hit the shot she did. That’s not like Ai at all,” she said, adding “she’s green, green.  I  mean, it’s boring to play with her because she hits so many greens.”  Lewis added an 18-footer on the par-3 17th for her third straight birdie.

Lewis picked up $225,000 for her win, but more importantly, ousted Taiwan’s Yani Tseng from the top of the LPGA standing after 109 weeks as number one lady golfer.  Miyazato finished second, moving up to 7th place.  Fellow Okinawan Mika Miyazato remains 10th.