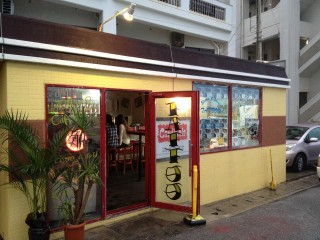 Mikazuki, who’s both owner and artist at Super Garlic Tattoo, is expanding his operations from the original Ajito opened four years ago in Naha City.  Mikazuki began dabbling in body ink when he was 24, and moved to Okinawa four years ago to introduce his Japanese traditional designs, as well as his own originals.

His new Super Garlic Tattoos is located inside Bar Cardinals, located along the Sunabe seawall in the bustling nightlife district on the north side of Transit Café.  He first became interested in tattoos while studying Japanese paintings at art school.

Mikazuki is open only on weekends from 7 p.m. ~ 1 a.m., but does require appointments that can be made by telephone at (098) 861-9262.  Those interested in discussing a specific type American or Japanese tattoo can also email him at tattoo@amus.co.jp.   Mikazuki, who was involved in Operation Tomodachi, and thanks everyone for their contributions, says “I have a bar on weekend nights, so let’s have fun together.”