Azaleas are in full bloom at Higashi Village 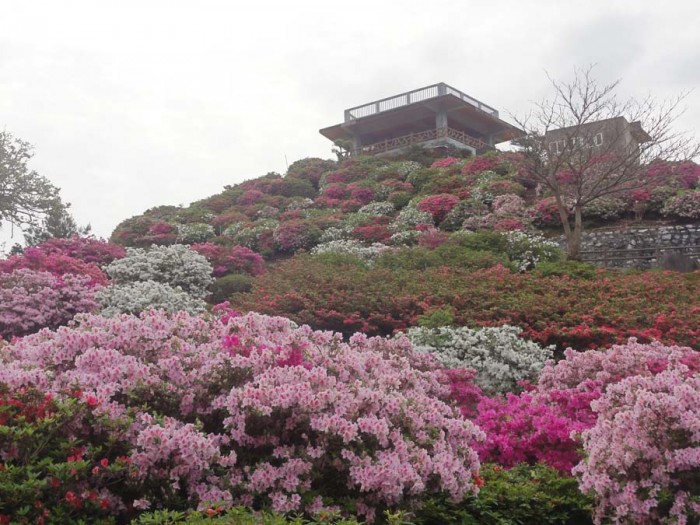 Hills at Higashi Village Azalea Park are now at their most colorful.

This week’s sunshine has been perfect for the island’s azaleas, which are now in bloom in Higashi Village where the 31st Azalea Festival is under way.

The flower festival is running daily 9 a.m. ~ 6 p.m. at Azalea Park in Higashi Village Forest in Kunigami County.  Admission is ¥300 for adults and older students, and free for those under junior high school age.  Some 50,000 azaleas planted inside the gardens are blooming, marking Higashi Village as the site of the largest flower festival in Okinawa.  The flowers are running ahead of schedule this year, and are in full bloom.

Special programs this weekend begin at 11:30 a.m. with a workshop on how to grow azaleas, followed by the Nago High School Band, Studio jaguri in Ryukyu University, Nago Sakura Drums, Mutsue High Ryukyu style dance show and a second workshop on growing the colorful azaleas.

On Sunday, the day begins and ends with workshops on growing the flowes, with a noon The Hit Parades musical followed by Sora Concert, Kozue Concert, the Tsuyoshi Azubuchi Show and the Ryuta Siroma Concert.

Tuesday RBC Radio will broadcast from Higashi Village, setting the stage for next weekend’s special events, which include Tange Music Club, Natchy, Tomigusuku Azusa, the ex-karate World Champion, Ryujhin Mabyer on Saturday, and the Higashi Village Marathon and the Village Karaoke Contest on Sunday the 17th.  March 23rd and 24th also will feature workshops on Azalea growing.