“Fly Board” is the latest “Extreme on water” 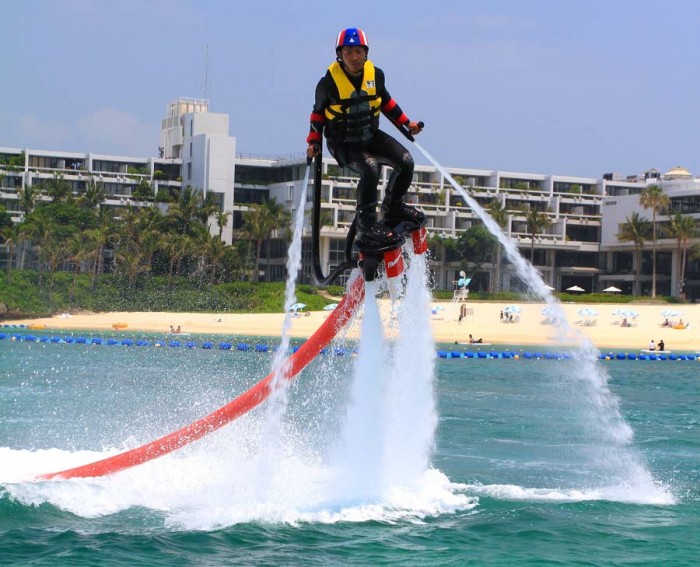 Water jet sprays on both hands help to balance the rider a little same way as ski poles do for a skier.

The “Fly Board” could be described as an extreme sport, transporting users through the air and underwater on bursts of water provided by a jet ski.

The Fly Board is making its debut on Okinawa, having already been introduced around the world.  Reservations for the Saturday, 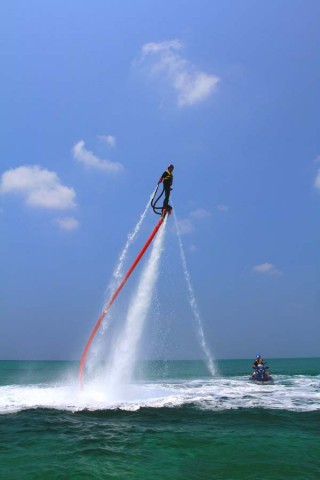 A fly board rider can fly as high as 12 meters above the water on a powerfun water spray powered by a jet ski.

In 2012, the super machine that has the world overwhelmed made its world debut, and “Fly Board” is landing on Okinawa at last!! The “Fly Board” is the ultimate marine sport, which can be enjoyed both on the water surface and underwater. A rider on a fly board can fly up to 12 meters high over the sea surface, then rotate in the air, and dive again just like a dolphin underwater, or to fly and bounce.

The motion, which is not usually considered possible by humans, becomes possible with the fly board. Water, which connects the nozzle of a jet ski through a hose to a fly board, powers the device. It also has balance handles for both arms to help to secure the balance in the air, used a little like ski poles.

An inexperienced person can fly easily after practicing for an average of about 10 minutes.

The demonstrations are performed at various events around the world and fly board is becoming popular. The World Cup of the fly board that, by the way Tom Cruise also loves, is held in October every year. It was held in Qatar in 2012, and  is scheduled for 2013 in Spain. Since there are still few riders in the world, a possibility of participating in the World Cup and becoming a world champion is the current challenge. 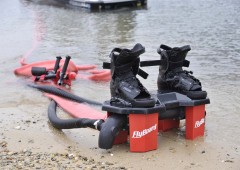 The fly board is very simple consisting of a board with stwo shoes and a hose for water from the jet ski.

In order that many people may experience the fly board, a test-ride event will be held. To see what fly board is all about, check out the video  at http://www.youtube.com/watch?v=m4Bm3cs9TFo.