Syusui Taba creating one of her giant calligraphy pieces during an event at Nakijin Castle site.

The names Taba Syusui or Fudemoji Art may never have been heard of by most people, but Fudemoji Art is the Syusui’s original calligraphy style and font.

Those familiar with it say it looks like regular calligraphy, but totally different. Syusui lets each character come to life, and people who watch them feel power flow from each of the characters. That is because her own art style is “Fudemoji Art”, and she is the mother of “Fudemoji Art.” Because she mastered the general basic calligraphy skills, and she could create her own font, she says it is a flowing

Syusui Taba working in her studio. 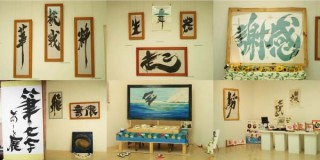 Syusui’s works line the walls at an exhibition.

After she achieved the 8th degree title of the Japan Calligraphy Association, the top degree of the association, she created her own font. Her works express the meaning of Kanji directly with image, and she hopes her works make people happy and promote communication.

Generally, calligraphy shows clear and beautiful style and balance is important, but there are many styles or schools in calligraphy in Japan. Sometimes there are calligraphy styles, which are unreadable even by Japanese. Each school has its own characters, and that are loved by its patrons.

Syusui’s font is different from regular styles, because the font was born from her own intuition, and does not imitate or copy others. She finds out what each part of individual “Kanji” implies, and what it’s about, then uses her imagination to create a story about them. That’s her great ability, because she feels and notices all that surrounds her and can create images through inspiration

For example, the Kanji character “生” means “life”, and she writes the character so it looks like a tree, which implies “strength” and “thickness” of life, sometimes likened to a willow, an unlimber plant for human life. The other example, the character written by her “舞” means “dancing”, and looks like people  dancing. She let it imply let’s dance at each person’s individual stage of life, noting everyone has his or her own stage. The kanji written by her bring out power.

She has presented her own “Kanji of the Year” each year since 2008, giving her inspiration and the word representing herself for the year. Japan Update did special collaboration with her this issue, and you will see her one Kanji at the back page of this issue!

The character “笑” means “laugh” , and that is the word inspired her from kanji the first time, and is still her basic key word of life. Japan Update encourages readers to take a look and keep this issue as their own. In fact, people viewing her work report they had some strange experiences such as a baby born to someone who wanted to have a baby for a long time. Requests by companies to write a character is getting larger, The word “感謝” means “Appreciation” from Orion Beer Company, “成熟の青” means “ripe blue” from Higa Awamori Brewing Company, and she wrote the title for a leaflet of “Nakijin Castle Site” that is a World Heritage site in northern Okinawa. People bring other people, and requests don’t stop asking her to write a character. She’s held an exhibition every year since 2008 and the 6th exhibition is scheduled for Okinawa Prefectural Museum from June 18th to 23rd.

Her works are her own and so unique she was invited to join the Japan Expo that was held in Paris, France, in 2011. She also has promoted a charity for victims of the Great Tohoku Earthquake and Tsunami since in 2011.

Exactly who is Syusui Taba? She was born in Haebaru Town, and started to learn calligraphy when she was only three years old because her older brother did it. She enjoyed it, and the talking topic at home increased her interest in calligraphy. Later, her mother also attended a calligraphy school, so one could say the whole Taba family is into calligraphy. She also received several awards while still a kid.

Still, she didn’t think that she would get a job relating to calligraphy at that time, but she kept doing it just because she liked it so much. Ultimately, she achieved the eighth degree title of the Japan Calligraphy Association, the top degree of the association, but she says she’s still not satisfied yet.

Easy to understand, it also put her heart to characters. She says that “I’m so glad that when people watch my works, and gets people to communicate, or creates laughter, the character I wrote is a change for joy and that, in turn, gives the joy of people back to me, that’s my real treasure. That is only my style and the style I have to do.”

“笑” means laugh is her key word and it will be her key word in the future, too. She hopes everybody puts on a smile and wishes for peace in the world, and then she’ll keep creating her work and put her heart into making everyone smile.