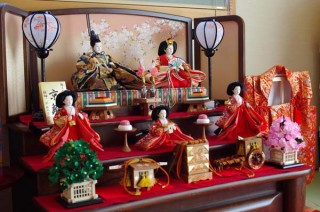 Hina doll sets are often elaborate, and can be very expensive.

The centuries-old festival traces back to the Edo Period running from 1603 to 1867, when the practice included a ceremony during which the sins of the body are shifted to a doll, which is then put adrift on a river. The ceremony traced back to China.  Beyond the ceremony, Japanese saw the special time of prayer for the health and wellbeing of young girls to be a good time to create a festival.  Hina, which means dolls, and matsuri, which mans festival, was instituted and the homes of young girls became the setting for doll displays.

The original dolls were made from straw and grass, but in recent years have been mass produced and sold in stores.  The dolls are placed in elaborate displays that often include peach blossoms, cubed rice cakes, and special colored and diamond-shaped rice cakes and white sake are made.

The Hina Matsuri is found in many locations, including the Jusco at Mihama.  At the core of the displays are the Odairi-sama, a prince, and Ohina-sama, a princess.  The typical seven-tiered Hina Dolla Set is on a platform with a red hi-mosen representing the emperor, Empress, attendants and musicians in traditional court dress of the Heian period.

The doll festival varies slightly in different regions of Japan, with different placements of the dolls from left to right, but the dolls set on the same platform levels in each.  The top doll tier holds two dolls, the Imperial dolls with the Emperor holding a ritual baton, and the Empress holding a fan.  The dolls are typically aligned in front of a folding gold screen, with accessories consisting of vases placed between the two figures.

The second tier has three court ladies dolls, each holding sake equipment.  Surrounding them are tables with seasonal sweets.  The next lower level holds five male musicians, all but one holding a musical instrument.  The fifth, a singer, holds a fan. The Taiko drummer is seated, while the large Okinawa drummer is standing. A hand drummer, Kotsuzumi, is standing while the flute player is seated.

Two ministers called daijin are displayed on the next lower level, the fourth tier.  The Minister of the Right is portrayed as a young person, while the Minister of the Left is the older. Between the two are covered bowl tables known as o-zen, along with diamond-shaped stands holding diamond-shaped ricecakes.  Rounding out the fourth tier are a mandarin orange tree below the ministers on the right, while a cherry tree is to the left.

The fifth platform holds three helpers, the samurai who protected the empress and the emperor.  They’re the Maudlin drinker, the Cantankerous drinker and the Merry drinker.  Closer to the base, on the sixth and seventh tiers, displays of miniature tools, furniture, carriages and other instruments of the era are displayed.  The sixth level has the furniture, including chests, storage boxes, mirror stands, a sewing kit box, a pair of hibachi braziers and sets of utensils used in tea ceremonies.  The bottom platform tier has the food boxes, a palanquin, an ox-drawn carriage and sometimes, an ox pulling a cart of flowers.

Ceremonies have changed over the years.  In the beginning, people often believed the dolls had the power to contain bad spirits, leading them to offer prayers and send the straw hina dolls afloat on a boat down river, a practice that was thought to carry away the evil spirits.  The Shimogamo shrine, part of the Kamo Shrine complex in Kyoto, was a leader in the practice, floating the boats down the Takano and Kamo Rivers to offer prayers for safety of children.  The practice has been stopped because the dolls often fouled fishermens’ nets, so the modern version is to sail the boats from the shore, and then recovering them after the spectators are gone, returning them to the temple, and burning them.

The Hina Matsuri offers amazake, a sweet, non-alcoholic sake drink of fermented rice, with colored arare, bite-size soy flavored crackers, along with a soy sauce-based soup that has clams. Clam shells in food are considered the symbol of a united and peaceful custom because they fit perfectly to each other, but to no other clam.