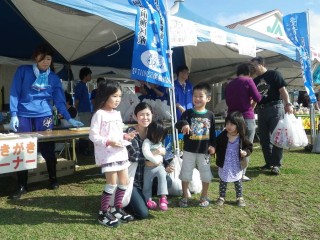 It’s billed as an event for people from Fukuoka now living in Okinawa, but the 5th Buzen Ocean Oyster Festival this weekend at Toyosaki is for anyone who really loves oysters.

The Buzean ocean is located on the east side of Fukuoka Prefecture, on the west side of Seto Naikai sea, where the nutrition in the sea is rich, creating what the locals describe as the best tasting oysters in the world.  Oysters grown here are called “one grain oysters of Buzen Ocean”, and are delicious with a thick taste.

Although oysters are usually sold removed from the shell, this “one grain oyster of Buzen Ocean is sold live in the shell, fresh and delicious.   The Saturday and Sunday oyster festival at JA Okinawa Shokusaikan, next to Toyosaki Road Station, is free except for costs of oysters.

There will be a bargain sale of oysters in the shell, with a bag of about 20 oysters going for ¥1,000.  There will also be a sampling party of charcoal broiled oysters.  The event is billed as running 10 a.m. ~ 5 p.m., but organizers say the festival will end as soon as all oysters are sold.