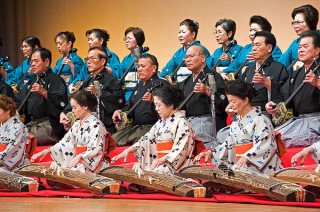 Sanshin Day Mar. 4 is marked by concerts in every part of Okinawa.

In an age of countless musical genres that employ the most modern digital technologies, Okinawa stands alone is keeping its ancient customs and culture alive with the sanshin and its unique sound.

Monday marks Sanshin Day in Okinawa (3/4; san = three, shi = four). Often said as the embodiment of the soul of Okinawa, the sanshin is a plucked banjo-like instrument consisting of a long, black-lacquered ebony neck which pierces the top and bottom of an open frame-shaped body covered on both sides with snakeskin. The three strings were formerly made of silk, although tetron is now more commonly used. The strings are plucked by means of a plectrum made of water-buffalo horn.
There are various types of sanshin classified in accordance with such features of the neck as the angle of inclination of the head section, the size of the peg box, and the curvature of the base of the neck before it enters the body. Named after their original makers, these include Makabi, Febaru, Chinen-deku, Kuba Shunden, Kuba-nu-funi, Hiranaka-Chinen, and Yunagushiku types.
Although sanshin was originally reserved for the Ryukyuan nobility, the sanshin became the favorite of the commoners during the nineteenth century, and is currently experiencing a sort of renaissance.

Today, the sanshin finds its way into nearly every form of music.  Pop and folk musicians and groups, including Okinawa’s Begin, integrate the sanshin into much of its music.  Interestingly enough, the mellow sounds fit everything from pop to jazz to Okinawa minyo, a more traditional sanshin sound that’s heard every day on numerous Okinawa radio stations, in bars, restaurants and clubs, and even in businesses.
It is said that when a fire broke out in a house, the first thing Okinawans rescued was the sanshin whereas in mainland Japan it was the sword. Nevertheless, such is the popularity of the sanshin nowadays that its soulful sounds are incorporated in many contemporary popular tunes.
One of the main events of the Sanshin Day takes place at Yomitan Village Culture Center, usually from 12 to 9 p.m. Yomitan Village is called the birthplace of “Akainko (Red Dog Baby)” which is the origin of Sanshin music.  . It is the Yomitan cultural center Ootori hall in Yomitan village that serves as the main hall, and the first musical performance starts with the time signal of noon. Song “kajadi” is played 9 times all over Okinawa by 9:00pm. About 3000 players gather in the main hall.

And costarring which players develop exceeding a school is the highlight.

If beginners also bring Sanshin for the hall, it can perform looking at the huge musical score concerning the stage. Moreover, also outside the prefecture, Okinawa lovers gather and it is said that Sanshin in all is played by a time signal.

Its close resemblance in both appearance and name to the Chinese sanxian suggests its Chinese origins, the old Ryūkyū Kingdom (pre-Japanese Okinawa) having very close ties with China. In the 16th century, the sanshin reached the Japanese trading port at Sakai in Osaka,Japan. In mainland Japan, it evolved into the larger shamisen.

In mainland Japan, many people refer to the sanshin asjabisen (literally “snake-skin strings”) orjamisen (“snake three strings”) because the body of the instrument has a snakeskin covering. Traditionally, it was covered with the skin of the Burmese python, but today, due to CITES regulations, the skin of the python reticulatus is also used. A bamboo bridge raises the strings off the skin.

Traditionally, players wore a plectrum, made of a material such as the horn of the water buffalo, on the index finger. Many still do, whereas others use a guitar pick or the nail of the index finger. In Amami, long, narrow bambooplectra are also used, and the strings are yellow and thinner, which allow a higher-pitched tone than that of the Okinawa sanshin. In Amami, the sanshin is called shamisen.

In the years following World War II, many Okinawans made sanshin from empty tin cans, known as “kankara sanshin”.