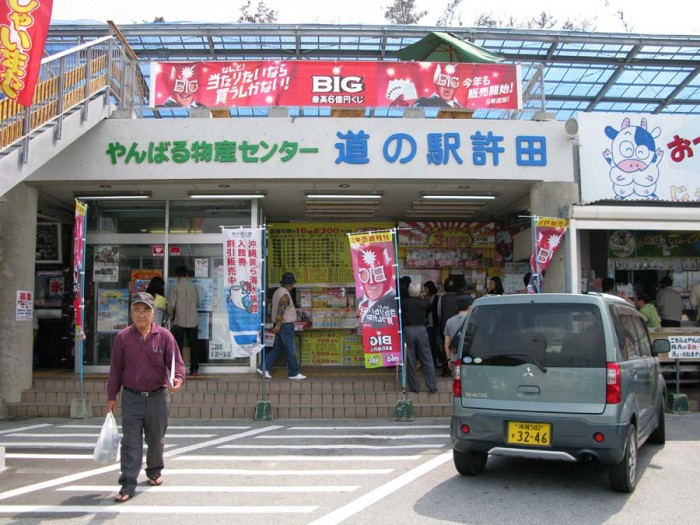 Kyoda Michi-no Eki has several “parlors” that sell snacks and sweets, not to mention lottery tickets that are considered specially lucky when bought here.

This is the fifth in a Japan Update series on Michi-no Eki rest areas scattered across Okinawa.  This venture heads to northern Okinawa.

Michi-no Eki Kyoda is within a three-minute drive north of Kyoda interchange on Okinawa Expressway and on the right side of the road just before Nago City. The Michi-no Eki stands along the Highway 58 and Nago Bay spreads out across from the facility.

Nago City, where the Michi-no Eki located has variety of sightseeing spots, such as Okinawa Fruits Land, Orion Beer Factory and 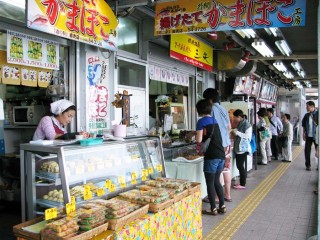 Over 1,000 local items line up the shelves in Kyoda Michi-no Eki shops. 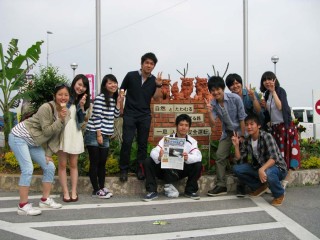 A group of an Urasoe high school students stopped by for ice cream.

Bankoku Shinryokan. There is also Okinawa Churaumi Aquarium in Motobu town, next to Nago City, so the area is highly valued among tourists. We begin to introduce Michi-no Eki in northern part of Okinawa over the next three weeks.

Michi-no Eki Kyoda opened in 1994 as the first Michi-no Eki in Okinawa. Kyoda attracts more than one and a half million visitors every year. It has not only specious places for relaxation, but 13 shops selling special local products, fresh vegetables and fruits, and also food stalls and restaurants for those who are overtaken by hunger.

Small food shops called parlor are especially popular for sightseers. Snacks and sweets made in the northern Okinawa area are sold, even in small amounts, such as only one Kamaboko, a fish sausage, or a Sata-andagi, often called an OKinawan donut. Currently, there are Oppa gelato shop, Hokama Kamaboko store, Mitsuya Sata-andagi shop. Also stalls that sell Okinawan old-style sweets, Zenzai, Sashimi and Okinawa soba are crowded with many tourists. “We had some relaxing time and enjoyed ice cream! It’s very good!” said students from Urasoe City on their high school graduation trip. They also explained that they stopped in Kyoda on their way up north to a region called Yanbaru.

A lottery stand placed in between the parlors is equally popular for visitors as it’s considered to be especially lucky spot. And indeed, plenty of lottery winners have bought their tickets at the stand collecting a total of more than ¥1.6 billion. Thus not a small number of people come solely with the aim of getting a chance.

Yanbaru local products center offers farm produce and souvenirs from 12 cities, towns and villages in the northern region. More than 1,000 items are lined up on the shop shelves. Pineapples harvested in Nago City will be on the shelves on the center from this spring to summer.

Discount tickets are offered in the facility to Okinawa Churaumi Aquarium, Nakijin castle, which is listed as a World Heritage Site, and others. For example, the tickets for the aquarium are ¥1,550 for adults, discounted from the ¥1,800 normal rate. Tickets to most attractions are available, so it is recommended to step over the Michi-no Eki before driving to those sightseeing areas. 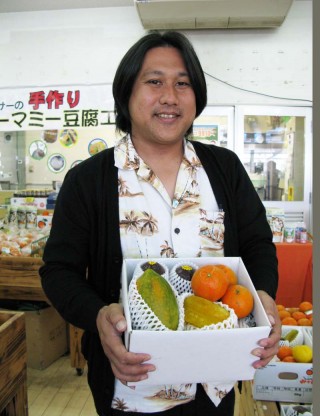 Morihiko Ogido, the section chief of General Affairs and Planning Section of Michi-no Eki Kyoda says they are always on look for new local products and attractions.

“We have been looking for new enjoyable places and things in Nago City and around the Michi-no Eki in order to introduce to visitors, because Kyoda is a gateway to the northern area, Yanbaru.” says Morihiko Ogido, the section chief of General affairs and Planning section of Michi-no Eki Kyoda. The Churaumi Aquarium is the most famous attraction in the north, though there are various places to enjoy, so it is good to ask for charms in the region for your good holiday. The facility is open 8:30 a.m. to 7:00 p.m. Seven days a week.

Michi-no Eki Kyoda often has events on weekends. On April 20th and 21st, Mozuku Nagashi, Flowing Mozuku, will be on the schedule. Mozuku is a type of edible and healthy seaweed. Mozuku nagashi is an event in Japan where people catch and eat Mozuku with chopsticks as it runs down a stream of water in a half-pipe. On April 28th, a brown sugar making experience event will take place after the day of Satoukibi, sugar cane. Anyone can participate in these two events free of charge.