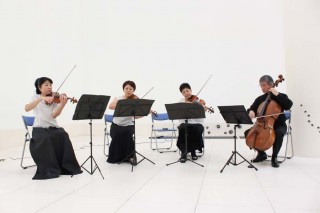 A pair of concerts linked to the “Studio Ghibli Layout Exhibition” currently in the Okinawa Prefectural Art Museum is set for Saturday, April 20th.

The concerts will be held in the entrance of the art museum, where musical pieces, including works from “Studio Ghibli” animation movies, will be performed by a string quartet. “Rose Quartet” is formed by four musicians active in both orchestra performances and junior instruction.

There are two 20-minute concerts, one at 2 p.m., and a second at 4 p.m. on the 20th.  Admission is free.  The Okinawa Prefectural Museum & Art Museum is located in Omoromachi next to San-A naha Main Place shopping center.

Studio Ghibli, Inc. is a Japanese animation film studio based in Koganei, Tokyo. The studio is best known for its anime feature films. Studio Ghibli was started in June 1985 after the success of Nausicaa of the Valley of the Wind with funding by Tokuma Shoten. The company’s logo features the character Totoro, a large forest spirit, from Miyazaki’s film My Neighbor Totoro. At one time the studio was based in Kichijoji, Musashino, Tokyo.

Over the years Studio Ghibli has produced 17 feature films, beginning with Castle in the Sky in 1986. The studio has also produced several short films and television commercials, as well as Ocean Waves, a television film. Eight of Studio Ghibli’s films are among the 15 highest-grossing anime films, with Spirited Away being the highest, grossing over $274 million worldwide.