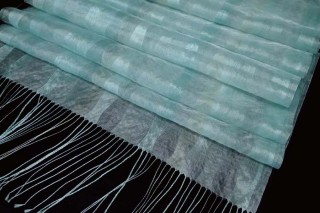 Akezuba textiles are made of threads that are only about 1/10 of the thickness of human hair.

One of Okinawa’s top rated silk textile artisans, Michiko Uehara, opens an exhibition tomorrow at the Okinawa Institute of Science and Technology.

Michiko Uehara’s works are called “Akezuba textiles”, a very thin textile.  She’s known not ony in Japan, but also inforeign countries.  Akezuba means the fabric is as light as the feather of a dragonfly.  Her textile style is carried out in a light and delicate form, like the feather of a dragonfly, and thus the name.  Her works may loosen from the cocoon of the live silkworm occasionally, as she creates about three meters of handwoven cloth.  Threads are only about 1/10 the thickness of a human hair, which is 1/5mm.

Born in Naha in 1949, Uehara studied weaving under the guidance of Yoshihiro Yanagi in Tokyo, returning to Okinawa in 1974 to learn techniques of traditional Okinawa weaving from Oshiro Shizuko.  In 1979 she set up her Mayu Textile Studio.

Past exhibitions range from the Nununu-Kai Art Forum in in Tokyo in 1986 and a solo show at Bin Craft Gallery in Okinawa, to a series of exhibitions and forums around the world.  They include: