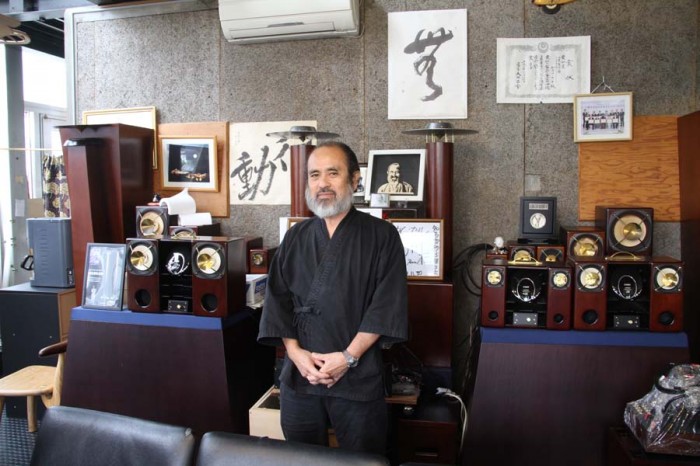 Hiroshi China’s one ambition in life is the pursue of a perfect sound.

When audio enthusiasts look for the absolutely best, they need not to look any further than China Audio shop in Kumoji, Naha, just behind Palette Kumoji, where Hiroshi China has built and sold his unique audio systems since 1974. 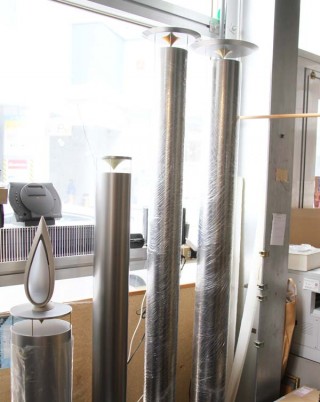 China’s studies have led to straight pipe-shaped speakers that he says produce the closest possible sound to live music.

First of all, a visitor to the shop is surprised by the shape of China Audio speakers. They look like a pair of strangely shaped towers. But according to China, it’s exactly that shape that creates a really clear sound. Another advantage is that a listener can be in any location in the room while listening whereas listening to a regular speaker system requires the listener to be on one focal spot to get the best results.

China, the owner, designer and creator of China Audio says that “all modern speaker systems are designed the way that the listener must face the speakers, but even people who love music don’t always want to sit on one spot all the time, and installing a sound system in a public space is even more impossible. Our system eliminates that problem.”

China found another source of distortion in the way copper wires and soldered to the amplifier and speakers. “Lead and copper conduct in slightly different ways, and that prevents small musical signals reaching the speakers. Our solution to this was 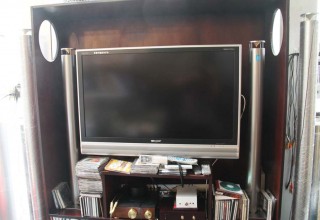 eliminating the soldering and welding the wire joints instead,” China explains, adding “We came to this solution gradually after much trials and errors over the years.” This also requires that every speaker must be hand-made, one by one.

Modern speaker systems usually have three speakers; one for high, one for middle and one for low frequencies. China’s speakers have just one called “Full Range Speaker” that is installed in a pipe. High and middle range frequency sounds are then emitted from the top of the pipe where a funnel-shaped reflector spreads the sound 360-degrees wide. Low-range bass sounds come from the bottom of the pipe. “It’ a bit like a sound cannon,” China says.

He says he recommends people listen to jazz, classics and live recordings with his system because it’s easier to feel the sensitiveness of the system but, of course, any genre of music is fine.

China’s speaker system was used in a concert in the United Nations Office in Vienna in 2009, in a concert at the Japanese Embassy of Austria. Sakima Art Museum in Ginowan City has installed his system, and many bars and restaurants have them, too.

Hiroshi China was born in 1947 in Ishikawa City (a part of the current Uruma City) on Okinawa, and even as a child, he liked to create things with his own hands. His first creative work was a paper plane with a rubber band-driven propeller, and he is still making model planes and radio controlled planes, which he says gives him much inspiration in his work.

When he was a child, only rich people could buy an audio system. He made his first crystal radio by himself when he was a primary school student, and made a vacuum tube radio when he was in junior high school. His works started gaining the attention of his neighbors, and he started getting order requests. He was pleased to comply, and decided to become a radio engineer.

After he graduated from high school, he became an engineer at an audio maker, and worked as a repairman, but he remembers wondering why even a famous manufacture’s items don’t sound clear, and are much different from live sound. He wanted to make the recorded music closer to live sound. Finally in 1974, he quit his job and established his own sound system company named China Audio.

After trials and error, he finally found the best shape to spread sounds with clarity. By now he has gotten seven patents for his system.

He says that he just wants people to come by listen his system. His two stores are located in Kumoji, Naha, just behind of Palette Ryubo, and in Chuo, Okinawa City, on the next street to Park Avenue. “Anyone interested in our system, please feel free to stop by. I like people listen to music with my system and feel happy,” China says.