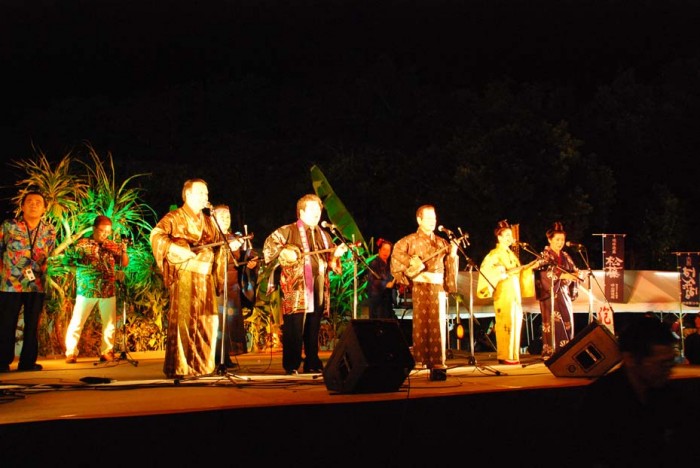 All performers at the Gusuku Shimauta Concert are notable entertainers of the Okinawan folk music genre.

The 2nd Gusuku Shimauta Concert will feature folk songs reaching to the very heart of Okinawa when it kicks off the weekend of June 22nd and 23rd on the grounds of the Katsuren Castle ruins. 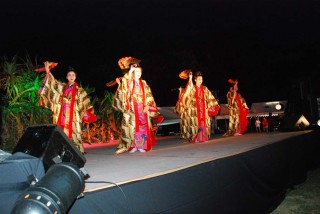 The concert is accentuated with performances by Okinawan folk dance and Eisa groups in between the musical entertainers.

The World Heritage Site at Katsuren Castle is in Uruma City.  Artists including Sadato China, Tatsuya Shimabukuro, and Hajime Nakasone on the 22nd, and Koichi Kamiya, Kiyofumi Tokuhara and Shosei Nakamoto on Sunday the 23rd. All are famous in the realm of Okinawan folk music.  Gates open daily at 4 p.m. and performances begin at 5:30 p.m., running until 8 p.m.  Advance tickets are ¥1,500 or ¥2,000 at the door.  A two-day ticket is ¥2,500.

Organizers say the June 22nd and 23rdconcerts will be held even if it rains.  Stormy weather will, however, bring the festivities to a halt at the Ruins of Katsuren 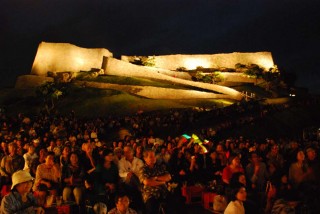 The venue has the World Heritage site Katsuren Castle ruins as the backdrop that adds to the traditional Okinawan atmosphere of the event.

Sponsors say that promotion of this area is achieved because visitors enjoy not only Okinawan folk songs but the Eisa dance style of the Okinawa tradition.

Distribution and sales of awamori are also scheduled for the grounds of Katsuren Castle Ruins. The music of Okinawa performed on stage in the beautiful outdoors is special.