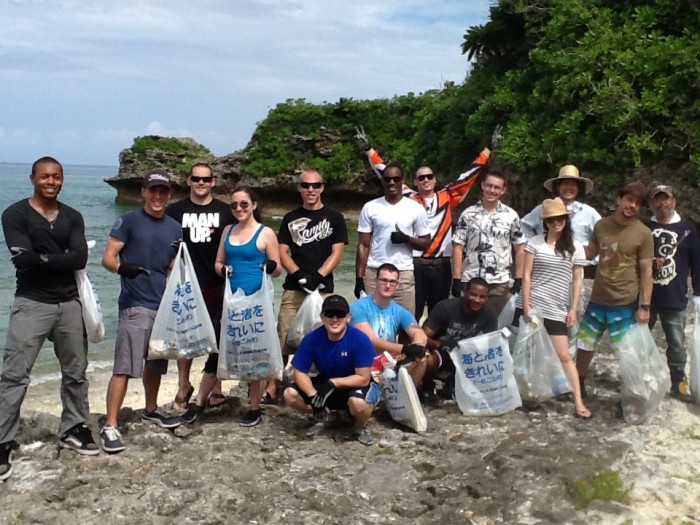 Members of the Air Force Leadership School joined to clean the Beach in Yomitan. 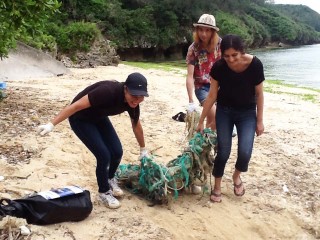 Many hands pull together on Okinawa to keep waters and beaches clean, and organizations are now putting together summer programs to get the job done.

The “I Love Okinawa / I Love My Beach / I Love My Reef projects are part of the greater NPO O.C.E.A.N. program.  The group just commemorated World Oceans Day on June 8th, and has activities on tap through next March 5th, Okinawa Coral Day.  Coming up this weekend is the MENSORE Okinawa NikoNiko Campaign on the 22nd.  On the third Sunday of every month, the NPO O.C.E.A.N. spearheads Family Beach Cleanup Days. 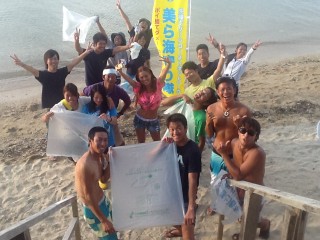 This weekend the 2013 First National Cleanpic Competition is in Okinawa.  The Saturday event is with teams of five people, each paying a ¥5,000 entry fee, to tackle Kaichu Doro, a 4.75km stretch of road connecting Yokatsu peninsula to the Henza Island.  In the middle of the long road is the Road Park facility museum.  Details are available at http://www.cleanpic.jp/

Marugoto Okinawa Clean Beach Campaign cleanups are running now through July, sanctioned by the Okinawa Clean Coast Network (OCCN) http://blog.canpan.info/occn/.  Also next month, the Okinawa International Clean Beach Club (OICBC) will conduct a special cleanup July 13 at Nago, Henoko and Matsuda Beaches, and at Cape Maeda, and Onna Village On the14th.  Clean up teams meet Sunday at the Divers’ House.  On the August 18th the organizations will participate in a special cleanup and mangrove planting at Nagahama Bridge in Yomitan.

The “I ♥ Okinawa Campaign®” was started in October 1992 with the founding of the Okinawa International Clean Beach Club (OICBC). OICBC members started the Okinawa Ocean Culture & Environment Action Network (O.C.E.A.N.) in 1995 becoming a registered nonprofit in 2003.

In 2002 together with the 11th Division Hqrts of the Japan Coast Guard the Okinawa Clean Coast Network (OCCN) was launched.