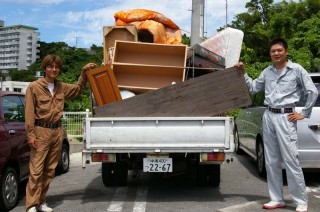 Ready to roll! Nothing you want to get rid of is impossible to dispose for Yutaka Shoji.

Its the season for moving, leaving Okinawa or deciding the time’s come to get rid of junk and old, unneeded things around the house.

Procrastination sometimes comes as you contemplate the hard battle about ridding your place of junk and garbage, which means it’s really time to call Yutaka Shouji and let his staff come to pick up everything you want to unload, including trash and garbage. Sofas, tables, TVs, refrigerators, clothing, motorcycles and cars, waste material, industrial trash, food trash and just about anything else you want to dump can be gone immediately! 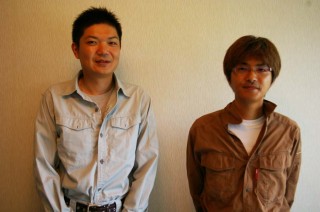 Yutaka Fukushima (right) and his fellow Yuki Morioka are ready to pick up junk anywhere on a short notice.

There is a delicate trash rule in Japan that makes it difficult to trash electric appliances and electronics equipment as regular trash, and those rules apply to lights, batteries, iron materials, furniture and much more. Breaking the rules and improperly disposing of such goods often leads to fines and penalties, but if you ask Yutaka Shouji to get rid of the items, you don’t worry about anything!

Yutaka Fukushima, the owner of Yutaka Shouji, used to work on a furniture staff, where he got plenty of requests from foreigners about picking up old furniture instead of installing new furniture. Old furniture, old equipment, broken furniture, broken large equipment is all hard to move on your own, even to the nearest public trash place.  In that case, doing it yourself, still requires buying a ticket for picking it up, and needing to call to make an appointment, too.

Yutaka thought it could be a business, with so many people wondering how to trash large items, and he figured he could help them while stopping illegal dumping at the same time.  Yutaka Shouji was established just a year ago. He was originally working alone, but requests kept getting larger.   He has now his reliable senior, Yuki Morioka, and they work hard together. The pick up work is very smooth, and a couple of hours later, the rear deck of his truck has a load. Customers who order the free pick up plan are pleased with results. They say “we load without limits while we have rope and block board!”

Sometimes they make more than 20 round trips to a single site, and do a few sites a day. They say it’s hard sometimes, “but we believe the work helps people and the environment!”  On the other hand, no job’s too small.  A pick up of even a single item is possible, with the single piece price of only ¥3,000. Yutaka says there are many kinds of customers who ask him to work, but he especially remembers one old man’s request. The man had lost his wife who lived with him very long time in Okinawa, and he decided to go back his own country America. Yutaka and Yuki cleaned his house, which held many memories.

Even in a high-rise story building, there are no extra charges, and free estimates are available on request.  Yutaka says he’s conscious about budgets to all parts of Okinawa’s main island. After the estimate on the site, if you accept the estimate, they can start to pick up on site.  Another special for Yutaka Shouji is that you can share the truck space with your friends, meaning you schedule the day for picking up with your friends at their places, too, and the truck comes and picks the stuff at your house and then your friends’ house, too, with the basic fee divided among the entire group.