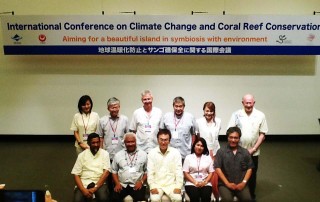 Amidst the headlines panning the proposed landfill at Ourawan Bay (Henoko) at the cost of 2310 x ¥100,000,000 and prayers for peace at the June 30th Miyamori Elementary School Memorial, the International Conference on Climate Change and Coral Reef Conservation took place in Onna Village at the Okinawa Institute of Science and Technology Graduate University (OIST) campus. It was a call to action for restoring our oceans health and our planet’s road to sustainability. Details are at http://www.env.go.jp/en/nature/npr/iccccrc2013/

It was a shining light of hope focusing on four themes:

From the Chair’s summary (draft): “In addition to the four themes of each parallel sessions, other important issues such as marine litter were also raised and discussed during the meetings, and it was emphasized that we should integrate these issues for an effective response.”

Minister of the Environment Nobuteru Ishihara announced the “Comprehensive support to island countries” with the purpose of promoting environmental measures in island countries through Okinawa following the conference.

The keynote speaker was Dr. Rajendra K. Pachauri, the Chair of the Intergovernmental Panel on Climate Change (IPCC) who gave an interesting, yet sobering, presentation letting us know that our oceans are losing their resilience.  He ended with a quote from Mahatma Gandhi:

“A technological society has two choices:

First it can wait until catastrophic failures expose systematic deficiencies, distortion and self-deceptions…

Secondly, a culture can provide social checks and balances to correct for systematic distortion prior to catastrophic failures”

I rather be on the second… Who is on the first? We were also reminded of the recommendations by the 42 participants of the Asia-Pacific Youth Science Exchange Forum, which took place at OIST in Sep. 2011.  Concerning our choices for coastal and island communities, the reality is summarized as: move, adapt, or drown.

On a positive note, it was announced that Okinawa will have its marine parks upgraded.  We still have to work on getting the Quasi-National Park and Cape Maeda to better levels of protection.  Thanks to Japan support, many Pacific Island Nations have put in place “cutting edge” policies, and created Marine Protected Areas (MPA).  We hope that it might have a boomerang effect and allow for us to learn from their experience right here in Okinawa.  Its time for Japan to harvest the fruit of expertise it so nicely planted.

Japan Minister of Environment Nobuteru Ishihara made the official announcement on Tuesday, Jul. 2 that the Keramas will become a National Marine Park.

Mariyam Shakeela, the Minister of Environment and Energy for the Republic of the Maldives, commented that this was the first time she has attended a meeting that connects climate change and coral reefs.  She suggested very enthusiastically that we take this ction and meet again next year in Okinawa.

Her suggestion was seconded and after a warm welcoming pledge by OIST President Dr. Jonathan Dorfan, and Dr. Ryutaro Yatsu, the Vice Minister for Global Environmental Affairs announced before adjourning for us to meet at OIST next year.

We are happy to say that there a lot of people in Okinawa and the Asia-Pacific who are committed to getting our oceans back to resilience by taking action at different levels.  It starts with protecting the right of our children to grow up on clean beaches.  Get out there or just pick up one thing, recycle and mind your choices at the supermarket.  Buy a SOO Project (Save Our Ocean) wristband.