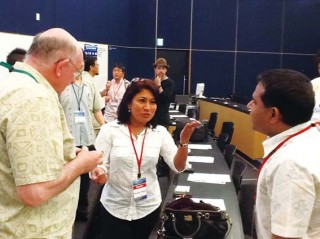 OIST President Jonathan Dorfan (left) chats with Dr. Mariyam Shakeela, the Minister of Environment and Energy of the Republic of the Maldives.

A two-day international conference on coral reef conservation ended in Okinawa Prefecture, Sunday, with a call for collaborative action against global warming.

A chair’s statement wrapping up the conference underscored the importance of cooperation between Japan and other island nations in dealing with common problems facing them.  Low-lying nations face a danger of submersion under rising sea levels caused by the warming, which has also caused a degeneration of coral reefs.  Officials from Japan and five other countries also tackled these questions at the international conference over the weekend at OIST in Onna.

The two-day conference, hosted by the Environment Ministry and the Okinawa Prefectural Government, was held at the initiative of Japanese Environment Minister Nobuteru Ishihara.  Officials from Japan and five other countries, mainly island nations, discussed how to protect the reefs, which contribute to a rich ecosystem.

“Japan hopes to use its outstanding human resources and technologies to contribute to protecting the global environment,” Ishihara said at the opening of the conference. Ishihara announced a Japanese initiative of extending comprehensive support to island nations in addressing environmental issues. Japan will provide personnel, technologies and know-how for protecting coral reefs, introducing renewable energy sources and establishing waste recycling systems.

Coral reefs are inhabited by about a quarter of all marine life but have been decreasing worldwide due to rising seawater temperatures caused.  The conference was designed to raise the awareness in Japan and abroad that coral reefs are endangered and convince the international community of the significance of tackling the climate change.  On Saturday, Rajendra Pachauri, chairman of the U.N. Intergovernmental Panel on Climate Change, delivered a keynote speech. Government representatives from Australia, Palau and the Maldives participated in a panel discussion.

Ishihara and Eriko Imai, a member of popular Japanese all-women pop group SPEED, attended a talk show on how to pass on beautiful coral reefs to the next generation. Four separate sessions Sunday dealt with such topics as coral reef conservation and mitigation measures on climate change in island territories. Experts from more than 10 countries reported findings from their studies.

It was intended as a one-time event, but Ryutaro Yatsu, the Japanese vice environment minister for global environmental affairs and chair of the conference, promised to make the conference a regular event in Okinawa next year and beyond, in response to calls from some participants.  Maldivian Environment and Energy Minister Mariyam Shakeela said the sustainability of coral reefs affects the survival of island nations.

The latest conference brought together about 700 participants including government representatives and researchers.