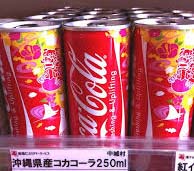 Friends of Coca Cola can enjoy their favorite drink from Okinawa themed cans in Tokyo and other big cities.

Coca Cola drinkers in mainland Japan are experiencing a bit of Okinawa these days, as the beverage giant unveiled a new version of the soft drink that uses Okinawa water.

The brightly covered Coca Cola cans with a red shisa, a lion dog, printed on the front, are now being sold in mainland Japan, including Tokyo’s Ginza district.  Coca Cola officials say the beverage in Okinawa cans is being manufactured using water from Okinawa.

Initial reports of mainland taste tests report the Okinawa-water-flavor Coke tastes exactly like any other Coca Cola.  The design features the shisa, the lion dog popular in Okinawa mythology, and other well-known Okinawa images.  Other images are the prefecture’s signature flower, the akabanaa, or hibiscus, and manta rays that swim along the Okinawa coast.  The coca colas sell for ¥120.