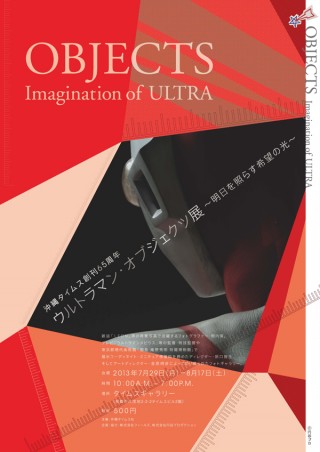 The Okinawa Times, as part of its 65th anniversary of its first publication, is presenting an “Objects Imagination of ULTRA Exhibition starting on Monday.

The exhibition at the Okinawa Times Gallery, located at 2-2-2 Kumoji, Naha City, runs through August 17th, from 10 a.m. ~ 7 p.m. Admission is ¥500. The art exhibition, which cut off the view of the world of “Ultraman”, an old school Japanese superhero “tokusatsu” TV show supporting Japan in the Showa Era, examines Ultraman from various angles. Tokusatsu means special effects in Japanese.

This exhibition centering on “Ultraman”, who came from the country of light to be the light of hope, provides all visitors with an opportunity to gaze into the future.

Ultraman is a Japanese special effect television series that first aired in 1966. Ultraman is a follow-up to the television series Ultra Q, though not technically a sequel or spin-off. The show was produced by the Tsuburaya Productions, and was broadcast on Tokyo Broadcasting System (TBS) from July 17, 1966 to April 9, 1967, with a total of 39 episodes–40, counting the pre-premiere special that aired on July 10, 1966.

Although Ultraman is the first series to feature the Ultra-Crusader, it is actually the second show in the Ultra Series. Ultra Q was the first. In fact, Ultraman opens with the Ultra Q logo exploding into the Ultraman logo. Ultraman ultimately became a major pop culture phenomenon in Japan. The show’s success spawned dozens of sequels, spin-offs, imitators, parodies and remakes.

To distinguish him from subsequent Ultra-Crusaders, Ultraman is referred to as the Original Ultraman, The First Ultraman, or Ultraman Hayata; is a reference to his host’s surname.