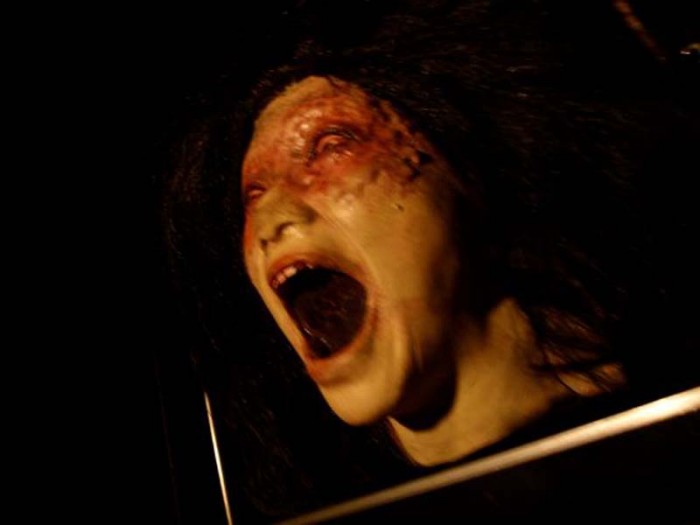 If she does not scare the living daylights of you when she pops up, nothing will.

Haunted houses are a part of the traditional landscape during certain times of the year, but it takes the works of an expert to create a heart-pounding, scary haunted house like the one now at Ashibina outlet shopping mall. 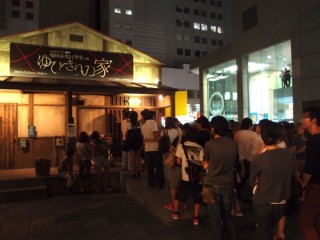 People line up for a visit to “Yubikiri” haunted house, now open in Ashibinaa

House of Yubikin is the handicraft of haunted house producer Hirofumi Gomi.  He’s a Japanese institution, producing more than 20 haunted houses in various locations in Japan, presenting an experience that does more than simply surprise people.  Most haunted houses are something a visitor only walks through to see a frightening scene.  Gomi’s haunted houses have a theme that generates fear as it is experienced.

The House of Yubikiri haunted house is operational at Ashibina’s special stage through Monday, September 16th, from 1:30 p.m. ~ 7 p.m. on weekdays and 11 a.m. ~ 7:30 p.m. on weekends and national holidays.  Admission for all visitors is ¥1,000.  Elementary school students ages 12 and under must be accompanied by an adult guardian to enter, and pre-school age children are not permitted.  Ashibina Okinawa Outlet Mall is located at 1-188 Toyosaki in Tomigusuku City.

The theme behind this haunted house is complex, centered around a girl named Ayako, who gave her mother a promise when she was a child. “Be a good girl. Let’s make a pinky promise,” but mother never came back.  Ayako was taken away, and from that time, the feeling of Ayako’s little finger was lost. Soon, when she grew up, she found a sweetheart, and made a promise with him. “Let’s go to an amusement park on Sunday next week. Let’s make a pinky promise.” The beau never showed up at the promised time, and Ayako again had the feeling of being discarded.  Her sense of darkness entered into her body, and she died lonely. Her dead body is still in drawing attention, and the little finger can be seen… seeking confirmation of promises by linking the little finger so she can die in peace.