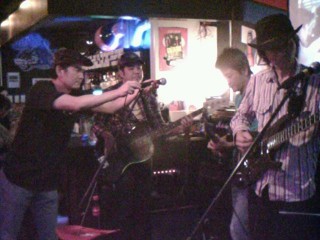 It’s an every-Friday-and-Saturday-night event, as rock ‘n’ roll band Shozy tunes up the guitars at Arte Koza in Okinawa City.

The glitzy band performs for free –no cover charge at Arte Koza—although it has a pass-the-hat style to get the audience’s attention.  Shozy Band will be performing Friday and Saturday nights this week, beginning at 7:30 p.m.

This is an event in which visitors can enjoy the early weekend night while drinking 1 ~2 beers while listening to famous old rock ’n’ roll.  Arte Koza is located at 1-16-2 Uechi in Okinawa City.