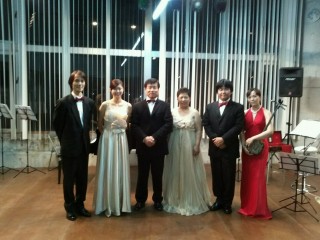 Il Piacere has won positive kudos wherever they have performed.

A European Musical Journey, Travel to Vienna, is the theme for three Classical Ensemble Concerts in Okinawa.

These are concerts of the classic ensemble sextet, which added a piano and contrabass to the string music quartet. “Il Piacere”, the name of this group, means “Our favorite”. “Il Piacere” is an ensemble started in 2000.  It has won popularity in various parts of Germany from its beginning. Even people, who seldom listen to classical music, like them very much.

Musical pieces such as waltzes of Vienna, a random musical piece of an old good time of Germany, the Ave Maria, will be included in the program. This is a classic concert by performers who feel Europe is the birthplace of classical music. Several of the players currently live in Germany, where they play actively, while other players are playing an active part within Okinawa prefecture.

Doors open for Friday’s concert at Tenbus Hall in Naha City at 7 p.m., with the music starting at 7:30 p.m.  Advance admission is ¥2,000 for adults and ¥1,500 for children through high school students.  At the door, tickets are ¥500 more. Tickets are available at Coop Apple, Ryubo, Arte Plan, Fukuhara Music, Tenbus Naha, and Angakyo.