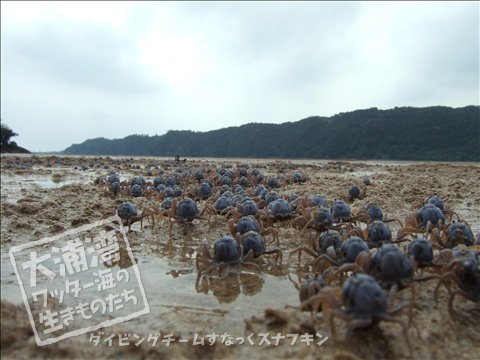 Marines are not the only ones living around Oura Bay.  Soldier Crabs also abound there.

We are in the middle of summer in Okinawa, and local kids are busy working on their summer research projects.  Now, here is a chance to get to know what lives under the seas, specifically inside Oura Bay. A photo exhibit currently on the way in Nago City Museum allows visitors take their virtual yellow submarine tour and with a little imagination plunge into the Oura Bay.  “Wan” is the word for bay in Japanese, and thus it’s easiest to understand the area as Oura –wan when talking with locals.

The pictures in the exhibit were produced by the Diving Team Snack Snufkin in collaboration with Aquamarine Fukushima, Okinawa National College of Technology in Henoko, Science Land and Wansaka Oura Park and with the support of the Nago City Museum.

Don’t miss some of the incredible underwater footage of the Sea of Henoko.

For kids and adults alike, it is a great idea to get familiar with the numerous creatures first by visiting the museum and then planning a day out by the sea.  Challenge yourself to seek out all of the creatures.  This makes for a great and fun summer project: “Seek and record mission”

The Ryukyu Soldier crabs are blue (Mictyris Guinotae) and named after Daniels Guinot from France.  They move like armies feeding in the shallows of low tide.  Their swarming behavior has been used in information security analysis.  Check out Marc Handelman’s post at infosecurity.us

For anyone that can supply a great picture of one of these creatures, the I Love Okinawa Campaign will give the top three a special prize. Pictures are accepted until September 22nd, the date of this year’s International Coastal and Underwater Cleanups. Send your entries to edo@okinawaocean.org

For Google Earth navigators its address is 1-8-11 Agarie, Nago City