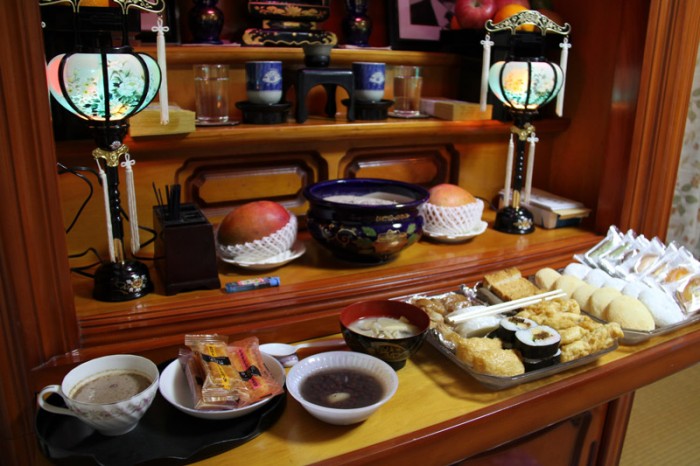 With the exception of eisa, Obon is mostly concentrated inside homes and in front of home altars.

For three days from Monday through Wednesday, many private businesses on Okinawa will be closed, although all retail shops, restaurants and all public offices stay open. It is Obon, one of the three primary holidays on the Okinawa calendar. 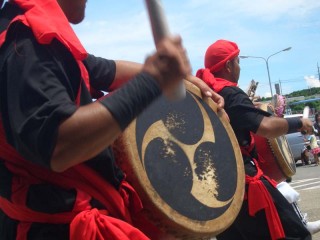 Eisa is performed as Bon Odori to honor and entertain the spirits of the ancestors, and is traditionally the job of young men in the community to perform.

Obon is a time for celebrating life, and welcoming ancestor spirits home for a family reunion.  It’s a Buddhist event, where ancestor spirits are believed to return to the human world in order to visit relatives. Traditions are everywhere, and you will see them at every turn during these three days. An although Obon was celebrated in the rest of Japan from Aug. 13th through 15th, Okinawa Obon follows the lunar of Chinese calendar and is celebrated August 19th ~ 21st this year..

It is said that on this single day of the year, the iron port of hell is opened, and the deceased are allowed to leave.  Buddhist services are held at temples and in private homes for ancestors, friends and relatives who’ve died, with particular focus on those who’ve died within the past year. 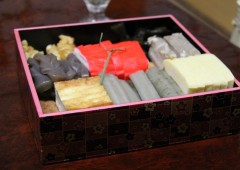 Food for Obon is specific as it has to be on table throughout all three days.

Monday is the first day of Obon, Unkeh, is a time for families to gather at the primary family residence to purify the home and its altar.  Family members will place fruit, water, sake, tea and a pair of sugar cane stalks on the altar in preparation for the visiting spirits.  In the evening, the family lights candles both at the altar and the gateway to the house to invite the spirits inside. Obon is a time of celebration, and Okinawa’s second unique custom, Eisa, is performed in streets everywhere.  Eisa is a traditional dance.  Obon is a time of gift-giving, and a time for sharing. Children and grandchildren return from mainland Japan to Okinawa to pay homage to the ancestors. It’s a time for Ochugen, the presenting of gifts to relatives and bosses and colleagues in the workplace.  Okinawa stores rack up hundreds of millions of yen in sales, with typical Ochugengift sets running ¥2,000~5,000.  Food seasonings, towels, beer and gift certificates are popular choices.

There will be dancing on the streets, parks and community centers, called bon odori, music, plenty of traditional lanterns hanging in front of houses to guide the spirits home, and intense family bonding.  Bon Odori is a religious folk dance originally conceived to comfort the spirits of the dead during their ritual visit to the earthly world.  It is a dance shared and participated in by Okinawans of all ages, including small children.

The Bon Odori varies from region to region in Japan, with different songs and dance styles, including some adaptations from other parts of the world where Okinawans have settled.  The Bon dance is held in the streets, as well as in temples across the island. Obon is an important event socially, as well as from a religious perspective.  It is a time when it is nearly mandatory that family members return home to be together.

Wednesday, the final day of Obon, is Uukui, a time when the family gathers and celebrates with a lavish dinner before preparing to send the ancestral spirits back to the other world.  A variety of foods are offered and special paper money, uchikabi, is offered to the spirits for use in the other world. Uchikabi is paper imprinted with a coin pattern. About midnight, family members will remove the offerings from the altar and move them to the family gate in front of the home.  Incense will be lit, the uchikabi burned, and the families say goodbye to the ancestral spirits for another year.  Okinawa tradition is that spirits will carry the uchikabi money with them, and use the sugar cane stalks as walking sticks.