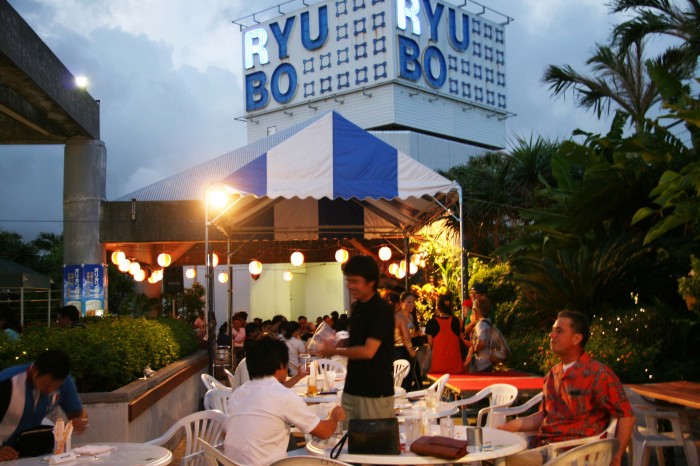 Japan has many uniques customs and setting up beer gardens on top of tall urban buildings during hot summer months is arguably among the best of them.

Temperatures are registering at record highs on Okinawa, creating the perfect environment for people to relax outdoors with the evening breeze, and enjoy a beer or a cocktail.

It’s the Palette Sky Beer Garden on the 10th floor rooftop of Palette Kumoji in downtown Naha City.  The beer garden is open through August 31st from 5 p.m. ~ 10 p.m., offering all-you-can-drink plans for the evening. Plan A is ¥2,000 yen for 2 hours, while Plan B is ¥2,500 yen for unlimited time.  The Palette Sky Beer Garden is also offering Beer & Cocktail drinks at ¥400 per cup, and soft drinks for only ¥200 per cup.

There’s a stage installed in the beer garden, and live musical performances of various genres, including jazz, Okinawan folk songs, pop and more are on tap. Although the genre of the music performed is different each time, visitors can enjoy the twilight time, soaking up the melodies together with their beer.

Beer gardens were first introduced to mainland Japan’s big cities, where entrepreneurs realized that folks sweating in offices and on the streets during the summer heat were craving a place to cool down and relax. In central Japan, that often meant the roofs of buildings, such as on top of department stores with tables, chairs and a fountain serving cold beer set up. The breweries, of course, were eager to be willing participants. Beer gardens typically came under the breweries’ thumbs, serving only one kind of beer, but plenty of it.

Okinawa’s different, of course, and as a tourism destination does things differently. Beer gardens such as found on the mainland aren’t common here, but local variations fall in resort, hotel or club establishments that provide barbeque or other foods, drinks and the like at poolside. Sometimes there is even live music.

Snack foods come from restaurants in the same building, but beers come fast. Limited snacks are prepared on premises, with a food menu containing 25 different items, including Blue Seal ice cream. The last food order is at 9 p.m., while drinks can be ordered until 9:30 p.m. A female dance group entertains twice a night on weekends while other entertainment is on the tap on weekdays. Most customers weekdays are office workers from nearby prefecture and city government offices, banks and insurance companies, while families are prominent on the weekends.

Pay parking lots are available in the area, including one beneath Palette Kumoji. Some close early, though, posing a problem for retrieving a car.