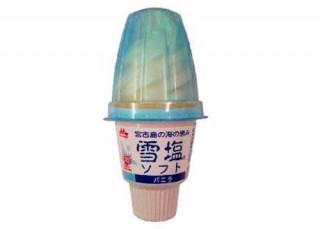 Ice Cream is often touted as a great way to cool down during summer, and Morinaga Milk Industry has taken another giant step to promote cold and frozen snacks by introducing a new product that uses an Okinawa ingredient to alter taste buds.

The secret ingredient is regularly used in cooking, but never thought to be a plus for ice cream.  Morinaga’s new soft-serve style ice cream is being called the “Yuki Shio Soft”, meaning snow salt soft ice cream.  As it sounds, the new product uses special snow salt made by Paradise Plan in Miyakojima.

Snow salt is produced totally from underground seawater in Miyako, drawn from a depth of 22 meters. water content of the sea water is quickly evaporated, a fine, powdery salt is obtained that retains the bitter, or nigiri, component that is usually removed in the process of producing salt, leaving the rich magnesium and calcium while lending it a mild flavor.

The new ice cream is currently being produced as a flavorful, rich vanilla that indulges the snow salt’s taste.  The contrasts, say those who’ve already been tasting the ice cream, work very well.  The Yuki Shio Soft ice cream is presently available in 160ml containers priced at ¥130~160.

According to Morinaga Milk’s press release, the Yuki Shio Soft ice cream is available only for a limited time, so when you see it in a supermarket, don’t procrastinate in making the purchase.