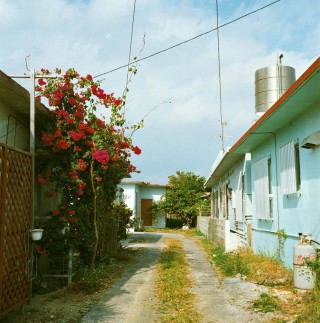 The photo exhibition concentrates on scenes of old American military houses, of which many are still standing and show shapes and styles that can be found in even today’s housing.

The United States military has been in Okinawa nearly seven decades, and a picture exhibition now showing in Ginowan demonstrates how little has changed over the years.

The free picture exhibition by Naohumi Okamoto is appearing at D&Department by Okinawa Standard through Sep. 24th.  Daily hours are 11:30 a.m. ~ 7:30 p.m.  Much of the U.S. military housing here was built after World War II, while Okinawa was under American control.

Very simple square shape concrete buildings were common, and many  exist today, showing the special atmosphere about America and Okinawa working in combination for the current generation of housing.  Naohumi Okamoto has been taking pictures of military housing on the island for more than a decade, and his works exude the special designs, atmosphere and mixture of the two cultures.

Through the 68 years America’s military has been here, the shapes of buildings haven’t changed.  People continue to live in the buildings, adapting to environmental changes but maintaining the lifestyles popular in the block-like concrete structures.

D&Department by Okinawa Standard is located on the second floor of Café Unizon in Futenma, on the left side of the street a couple of hundred meters south of the base gate to the new Navy Hospital on Camp Foster.