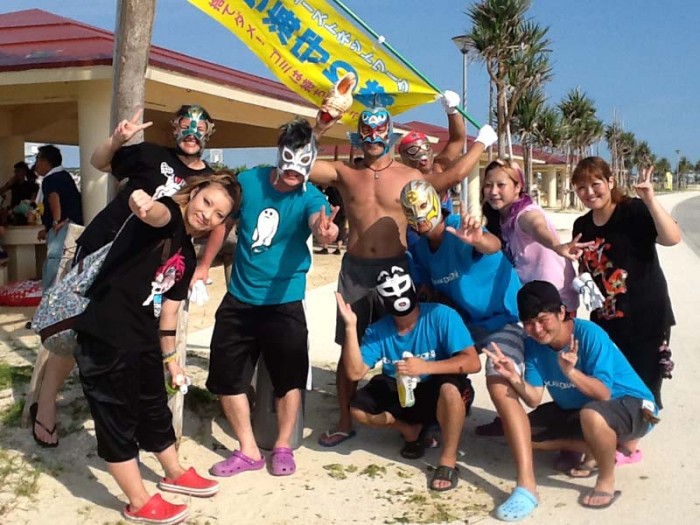 Its time to get ready for the International Coastal Cleanup (ICC) known in Okinawa as the Ryukyu ICC Challenge with cleanups planned prefecture wide as we join volunteers all over Japan and the world to keep our oceans clean.

The Bureau of Oceans and International Environmental and Scientific Affairs (OES) seeks to elevate international awareness of the problem of marine debris by conducting this Marine Debris Art Project, partnering with the Ocean Conservancy, NPO Okinawa O.C.E.A.N. and U.S. Consulate General Naha who are sponsoring this project.

Everyone on the island is invited to participate in the Ryukyu ICC Challenge and complete pieces of art using marine debris. Details will be announced in next week’s issue “ I ♥ Okinawa Campaign® “ column.

In Okinawa the cleanup effort is spearheaded by the NPO Okinawa O.C.E.A.N. as part of its yearly “I ♥ Okinawa Campaign®” encouraging local leaders to start their own “Clean Beach Club” ™, and with a little “Yuimaru” spirit, sweat and fun, protect the right of our kids of today, to grow up with clean beaches and healthy oceans. In the meantime, we adults keep trying to figure out how to get our oceans out of this mess and live intelligent life towards sustainability.

With those goals in mind, we started in 1992 as the Okinawa International Clean Beach Club.

Ocean Conservancy, has organized the ICC for nearly thirty years. The Japan Environmental Action Network (JEAN) coordinates cleanups Japan wide and is working closely with the Ministry of Environment and NOAA about the after tsunami related cleanups.

Thanks to hundreds of local cleanup coordinators and thousands of volunteers along with the help of key government agencies like the 11th Division Headquarters of the Japan Coast Guard Okinawa Clean Coast Network (OCCN), the U.S. National Oceanographic and Atmospheric Administration (NOAA) and many others, we hope that together we can motivate a world ocean renaissance.

Okinawa can become a leader in ocean conservation as a hope spot for the Asia-Pacific.

Details on how to participate will be in next weeks JU with prizes to be awarded for the top ten Artists and displayed during the Blue October UNEP NOWPAP Workshop at OIST.

The goal of the art challenge is to increase awareness about marine debris, and highlight that international cooperation is needed to address many of the sources of marine debris. Our oceans are losing their resilience, so its up to us to help the big blue keep us breathing.