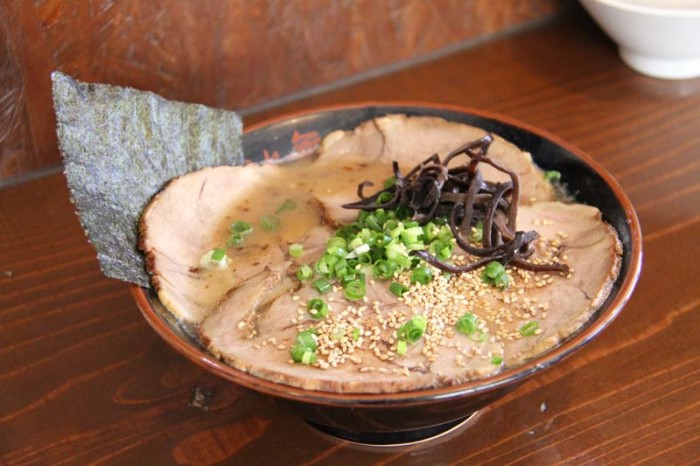 Wholesome rich tasting soup isn’t something that comes easily, but rather, the result of perseverance. 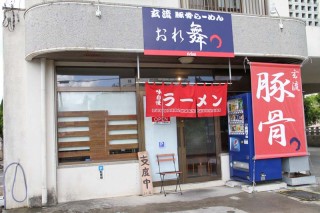 Genryu Ramen is the nickname of Orebu’s ramen, with its soup base consisting of pork, chicken and pot herbs –all from Okinawa– and boiled and stirred for up to 10 hours. The process is so precise, there are even special instructions to staff on how to chop pork, because its taste changes a bit depending on how it’s done; they go by trial and error, then try and try again to get everything just right.  It’s such a challenging concept, the taste sometimes can be different depending on the weather.

Chef Mitsuhiro Kono says it is very sensitive work to make the taste of soup stable. Kono and his team researched one year what is the best way to achieve that, and finally figured out right tricks. That’s what is being offered now, and is waiting for you. 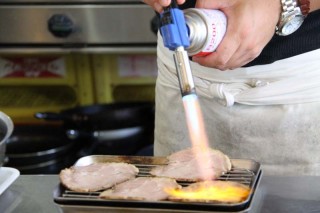 Genryu Ramen is topped by slices of pork, which are blowtorched one by one for extra flavor.

Ramen Orebu celebrated its second anniversary this August. Kono is confident cooking his soup, but has now two other staffers in the restaurant to assist him.

The side dishes at Orebu are also satisfying, including gyoza, which are hand made one by one. Kono recommends customers to try them along with his rich tasting Genryu Ramen.

He also serves his Genryu Ramen and gyozas at a stall at Hamby Night Market in Chatan, near Araha Beach. The stall is open from 10 p.m. – 5:00 a.m. on weekdays and 11 p.m. – 5 a.m. on weekends. The autumn is around the corner in Okinawa, and eating hot ramen at a street stall is a very common custom in mainland Japan!

Kono is also the owner of bar “Orange Boom” that he has been running in Mihama, Chatan, for the past 10 years, ever since he moved to Okinawa from Tokyo. He was the chef and owner of a restaurant in Tokyo, and one day a friend asked if he would be interested in managing a bar in Okinawa.

He decided to give it a shot thinking he’d do it for a year, and then go back to Tokyo, but after he started his bar, he got so involved in Okinawa, he stayed. Because Kono is a soccer lover, other like-minded people come and watch soccer games on a huge screen on the wall of the bar whenever there are special games on schedule. During the last World Cup soccer games, there were more than 100 people of various nationalities gathered in the Orange Boom having fun watching the games.

Kono sometimes served his original Ramen to customers in his bar even there was no ramen listed on the menu, because Kono is also a serious ramen aficionado. As the reputation of the good taste of his ramen spread from people to people, Kono decided to open a Ramen restaurant, too. That’s how ramen restaurant Orebu got started. He thought first he could make his soup in the ramen restaurant the same as in the bar, but it was not to be. He discovered that making broth for individual meals and a large number of people required entirely different preparations that he had to think the whole process anew in order to get the taste he wanted.