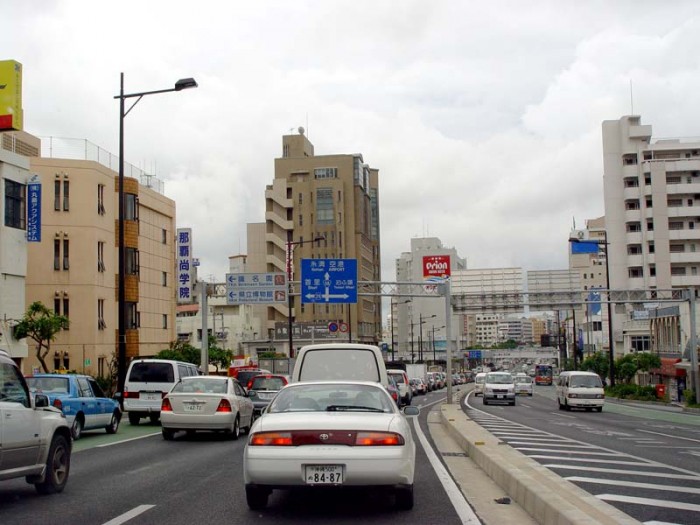 Trying to speed up doesn’t get you anywhere faster on Okinawa.

When driving on Okinawa, in my opinion it is best to put on some peaceful music like Bob Marley or classical rather than an aggressive faster-paced heavy metal band to suit the more relaxed driving atmosphere.  The fastest speed you are legally able to drive is 80 km/h on the Okinawa Expressway.  Road speeds other than the highway are usually about 40 km/h, so more often you are going to be driving at a slow pace, and should not expect to get anywhere fast. The road speeds are set slower to create a more harmonious driving environment, with safety being the number one priority. Although it may seem frustrating at first to drive so slow, the Okinawa traffic accident statistics are prove that slower road speeds are safer.  The incidence of fatalities due to traffic accidents is also very low.

Even if you do decide to drive faster than the legal speed limit, there is no way you can beat a stop light. The stop light placement is quite frequent if you haven’t noticed. There are 25 stoplights on the drive from Ginowan City to Chatan Town, making it near to impossible to make the drive in less than 20 minutes. The traffic light placement is also set on purpose to make it more difficult to speed and therefore requiring less traffic police officers. There are very few traffic police officers on Okinawa enforcing laws such as the speed limit because there are very few straight-aways, and even on those straight-aways Okinawa has speed cameras ready to nab the eager drivers trying to get somewhere fast.

You may have noticed the traffic grow to a bumper-to-bumper type situation on roads such as Route 330 and Highway 58. During rush hours this type of situation is a daily occurrence due to the population density and the narrow roads that at best are three lanes, but normally two. Although there are technically two lanes on Route 330, it’s best to consider it a one-lane route as parked cars or cars making right-hand turns often use one of the lanes for these purposes.

A downpour of rain can also create a traffic jam. This is because the roads become very slippery and people drive more carefully and slowly to avoid a fender bender. The roads become so slippery during rainfall because the asphalt mixture is different than roads off the island. On Okinawa the roads consist of calcium carbonate mixed in with the asphalt, creating a slippery pavement with less grip than other road textures.

Adapting to driving on Okinawa is quite simple; it all starts with the frame of mind you begin with getting into your car. A simple choice of music in the car can make your Okinawan driving experience peaceful rather than stressful. A few more tips are to remember to be courteous, always allow someone to merge in front of you, and make sure you allow plenty of time to reach your destination as you are going to need it.